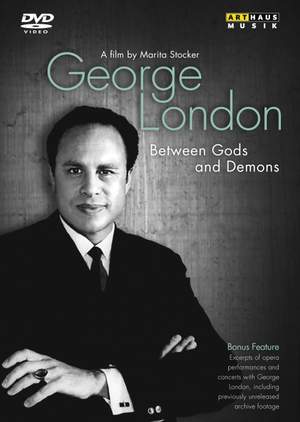 George London: Between Gods and Demons

A Film by Marita Stocker

This documentary includes various filmed excerpts of his roles, capturing his old-fashioned but electrifying characterisations - arguably more realistically than disc, which often exposed a grainy... — BBC Music Magazine, March 2012, 4 out of 5 stars More…

George London was one of the most impressive bass-baritones of the postwar era. He sang on the side of Maria Callas, Renata Tebaldi and Nicolai Gedda, to name only a few, and captured the audience’s hearts with his distinctive voice and his charismatic stage presence. Way too early he had to stop his singing career due to a vocal chord disease.

The fi lm portrays this exceptional artist in all its diversity, shows rare archive footage of his great performances as an opera singer but also as an interpreter of traditional spirituals and operetta. Another important element of the fi lm are interviews with his widow Nora London, with former colleagues, experts and current stars of the opera scene as Neil Shicoff, Catherine Malfi tano and Deborah Polaski, who have been taught by George London, supported in their career by the George London Foundation or see themselves as his followers.

This documentary includes various filmed excerpts of his roles, capturing his old-fashioned but electrifying characterisations - arguably more realistically than disc, which often exposed a grainy quality in his voice, less apparent in the theatre...Various 'talking heads' including singers Hilde Zadek and Waldemar Kmentt contribute comments, but the performances are the main point, and they're thrilling.

London was...an admired colleague and artist and this portrait goes some way towards demonstrating how much he was liked. Importantly, most of the source material is in reasonable shape and there need be no worries on that score