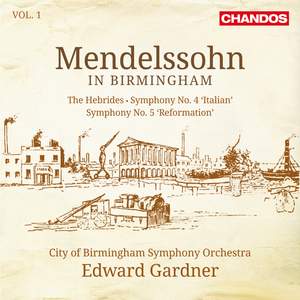 Unsurprisingly, the quality of the playing here is very high. I particularly enjoyed the timpani roars in The Hebrides Overture. In the Italian Symphony, Gardner coaxes elegant phrasing from... — BBC Music Magazine, April 2014, 4 out of 5 stars More…

David picks out some recordings of the German Romantic composer Felix Mendelssohn.

David picks out some great recordings on the theme of all things Hallowe'en... discs that go bump in the night!

‘Mendelssohn in Birmingham’ is an exciting new recording project with the CBSO and its Principal Guest Conductor, Edward Gardner. It celebrates Mendelssohn’s special relationship with the city’s Town Hall and will feature the complete symphonies recorded there. It was a venue much loved by Mendelssohn and saw him conduct many of his own works there, including premieres. ‘Mendelssohn in Birmingham’ also encompasses a major concert series at the Town Hall which will run alongside these recordings.

Inspiration for The Hebrides, recorded here in Vol. 1, sprang from experiencing the seas and landscapes of the Scottish Western Isles. The famous wave-like repeated patterns of its opening set the scene for a vivid work that has been a template for composers of ‘sea’ music ever since. Symphony No. 5 ‘Reformation’ was completed in 1832, and although the last of his numbered symphonies, it was the second to be composed. Typically for Mendelssohn, he had doubts about its quality and soon wrote it off. This self-criticism is highly exaggerated of what is a finely crafted and original work. Similarly, despite the success of its premiere in 1833, Mendelssohn significantly revised and eventually abandoned his ‘Italian’ Symphony, No. 4. Fortunately the original score from the premiere was recovered and published, posthumously, in 1851. The symphony is relatively short and its pervasive lightness of touch lends it a unique character and charm.

Unsurprisingly, the quality of the playing here is very high. I particularly enjoyed the timpani roars in The Hebrides Overture. In the Italian Symphony, Gardner coaxes elegant phrasing from the strings...In contrast, [he] allows the Reformation Symphony its full measure of grandeur and intensity.

Gardner's approach is entirely logical, given Mendelssohn's markings. The Hebrides is very dramatically played...All in all a fine trio of performances, individual for sure, and an encouraging start to what I hope will be an extended series.

Did it move me? The answer is a resounding ‘Yes’. The playing is enthusiastic and balances the intimacy and drama of much of this music. Gardner is sympathetic to the nuances of Fingal’s Cave and the sun-drenched pages of the Italian Symphony: he has given me a version of the Reformation Symphony that I can do business with.

a characterful performance of his famous Hebrides Overture.

[Gardner] and the Birminghamsters catch the hazy “Scottish” atmosphere of the Hebrides, and he is expansive in the outer movements of the Reformation, with its quotation of the Dresden Amen and Luther’s chorale, Ein feste Burg. The Italian Symphony is exhilaratingly delivered — with poetic solos in the andante con moto — especially the breathless Saltarello presto finale.

He characterises the land- and seascape of the “Hebrides” Overture with a good ear for storm, surge and serenity, and the purposeful instrumental detail that he elicits is a vital factor, too, in the “Reformation” Symphony.