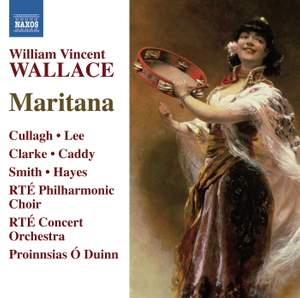 [I] feel all the wiser for having at last been given the opportunity to hear a modern performance of this very important work, it's part of the missing link in our knowledge of British music... — Gramophone Magazine, August 1997 More…

Act I: Romance: It was a knight of princely mien (Maritana) - Chorus: Sing, Maritana! No delay! (Chorus)

Act I: Angelus: Angels that around us hover (Chorus)

Act I: Duet: Of fairy wand had I the power (Maritana, Don Jose)

Act I: Chorus: Pretty Gitana, tell us (Chorus) - Song: Yes, the language of the skies (Maritana)

Act II, Scene 2: Song: There is a flow'r that bloometh (Don Caesar)

Act III: Introduction - Recitative: How dreary to my heart is this gay chamber! (Maritana)

Maritana was one of the most popular of mid-nineteenth-century British operas. Its 1848 première was a triumph and was soon followed by performances in opera houses from Vienna to Philadelphia. The absurd plot, which contrasts life at the Spanish court with that of the Gypsy street-singer of the title, is subsidiary to the appeal of a string of infectious and much loved arias such as There is a flower that bloometh and Yes! Let me like a soldier fall. Wallace’s opera Lurline is available on Naxos 8660293-94, on which the American Record Guide commented: ‘The opera and the performance are both a delight.’

[I] feel all the wiser for having at last been given the opportunity to hear a modern performance of this very important work, it's part of the missing link in our knowledge of British music theatre...[the cast] all sing with total dedication and conviction. It isn't at all difficult to understand Maritana's popularity, nor with the ensuing snobbery of the twentieth century, why it fell out of favour.

The music is effortlessly tuneful, if occasional banal...[Cullagh's] light lyric soprano is just perfect for the [title] role and her diction is as clear as Waterford crystal...this reissue is worth exploring, not least to hear Cullagh's assumption of the title-role.