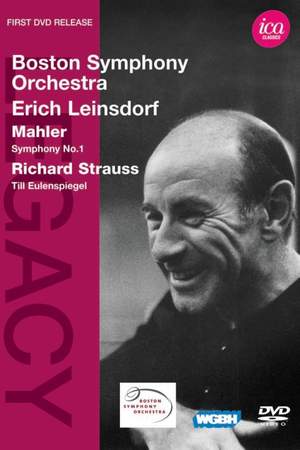 Leinsdorf is efficient in Mahler's First Symphony and Till Eulenspiegel — BBC Music Magazine, January 2012, 3 out of 5 stars More…

This series of DVDs will make the publicly broadcast BSO concerts from this era available for the first time since they were broadcast. This rare material represents some of the earliest televised concerts with the Boston Symphony and Erich Leinsdorf, and has been restored using the greatest care and state-of-the-art techniques. It is of exceptional musical interest and historic value.

Born in Mahler’s city, just over eight months after the composer’s death, Leinsdorf began his career as assistant to Mahler’s own assistant and protégé, Bruno Walter.

He played an important role in building an audience for Mahler’s symphonies during his tenure at the BSO, which came just before the Mahler boom in the 1960s.

Leinsdorf recorded all of Mahler’s symphonies apart from the Fourth for RCA Victor; recordings which became the benchmark both for sound and performance quality.

Intense, warm and expressive, his performance of Mahler’s First Symphony is an intensely personal account whilst Till Eulenspiegel – which was a party piece for the BSO during his tenure - is performed with great precision and finesse.

Two of ICA’s BSO DVDs featuring Charles Munch as conductor, have been awarded the Diapason d’Or in France’s Diapason magazine.

Leinsdorf is efficient in Mahler's First Symphony and Till Eulenspiegel

it is possible to see how Leinsdorf offers a supple approach to tempo, which offers appropriately spacious phrasing throughout. His cues give a sense of the style that he wanted from the players, and the result is evident in the performance...Part of the success of the interpretation comes from Leinsdorf’s decision not to use the baton, and so his hands offer a clue to the ways in which he made this performance expressive.