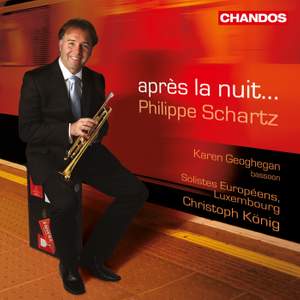 [Schartz] catches the atmospheric nocturnal feeling of the music...Most enjoyable is the disc's most unfamiliar work: Roland Wiltgen's apres la nuit...it not only gives the feeling of being hot... — BBC Music Magazine, April 2012, 3 out of 5 stars More…

The trumpet is the undisputed star of this disc, which combines rarities in the repertoire with some well-known trumpet concertos. The works are performed by Philippe Schartz, one of the most exciting trumpeters today. A winner of numerous prizes and awards, he has developed a highly successful career as an orchestral and a chamber musician as well as a soloist. On this disc, he is accompanied by the Solistes Européens, Luxembourg under their Musical Director and Principal Conductor, Christoph König.

Roland Wiltgen wrote the Concerto for Trumpet and Strings après la nuit… for Philippe Schartz in 2010. Commissioned by the Solistes Européens, Luxembourg, the work was premiered by that ensemble under Christoph König at this year’s Echternach International Festival in Luxembourg. In the words of Wiltgen himself, ‘the listener might imagine a sleeper dreaming of the following day… beginning calmly, then getting more and more hectic, before slowing down and preparing for another night of dreams’.

The exclusive Chandos artist Karen Geoghegan plays the solo bassoon part in Hindemith’s Concerto for Trumpet and Bassoon – this disc will follow her recording ‘Fantasies for Bassoon’, to be released in October 2011. The concerto showcases Hindemith’s expert knowledge of the character and capabilities of each instrument.

The Armenian composer Alexander Arutiunian is well-known to trumpeters for his Trumpet Concerto with large orchestra of 1950, which is recorded by Philippe Schartz on CHAN 10562. The tuneful Elegy for Trumpet and Strings, recorded here, followed in 2000, commissioned by Thomas Stevens, the principal trumpeter of the Los Angeles Philharmonic until 1999, and Doc Severinson, legendary trumpeter and bandleader.

[Schartz] catches the atmospheric nocturnal feeling of the music...Most enjoyable is the disc's most unfamiliar work: Roland Wiltgen's apres la nuit...it not only gives the feeling of being hot off the press, but it's also expertly written (Wiltgen studied the trumpet). It's a variegated dreamscape in which everyone works towards a common goal.