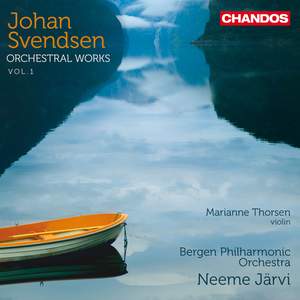 Rightly praised for orchestral mastery, Svendsen's music attracted the approbation - and its composer the friendship - of Wagner and Grieg, and Nordic audiences took it and him to their hearts.... — Gramophone Magazine, January 2012 More…

This is the first volume in a projected series of four, dedicated to the orchestral works of the Norwegian composer Johan Svendsen. As a composer, Svendsen was intrigued and inspired by the new trends in music represented by Wagner, Berlioz, and Liszt, a fascination which is evident in the works on this disc: programme music and rhapsodies. They are performed by the same strong partnership that brought us the highly acclaimed Halvorsen series: the Bergen Philharmonic Orchestra, and Marianne Thorsen on violin under Neeme Järvi, a conductor noted for his recordings of Nordic repertoire.

Svendsen experienced a defining moment in his career in Bayreuth in 1872, when he played in the first violin section of Richard Wagner’s own orchestra. He and Wagner met and struck up a close friendship. It was during this time in Bayreuth that Svendsen completed Carnival in Paris, the ‘Episode for Orchestra’, Op. 9. When Wagner one day looked over the score, he hummed delightedly and said, ‘It looks amusing!’ – a fitting description of this festive work which shows the influence of Berlioz in its colourful orchestration and clear contrasts. Humour, joy, and breathtaking virtuosity are contrasted with moments of pure romance and lyrical beauty. The premiere was a great success, Edward Grieg, who was present, being overwhelmed by the orchestration.

The Festival Polonaise, Op. 12 was composed in honour of the Coronation of the Swedish-Norwegian King Oscar II and Queen Sophie, and brims with a sense of pomp and ceremony suitable for the grand occasion. The work strikes a vivid contrast to Ifjol gjett e gjeitin (Last year I was tending the mountain goats), a charming set of variations for strings on a Norwegian folk tune. It became one of the composer’s great successes, as did the orchestral masterpiece about ill-fated love, Zorahayda, described by the composer as a ‘Legend for Orchestra’.

Rightly praised for orchestral mastery, Svendsen's music attracted the approbation - and its composer the friendship - of Wagner and Grieg, and Nordic audiences took it and him to their hearts. It is easy to hear why...Jarvi once again draws some refined and vibrant playing from the Bergen Philharmonic and Chandos's warm sound is vivid and bright.