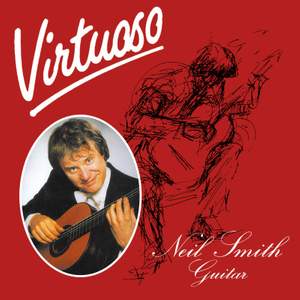 Grand Sonata in A Major, MS 3: I. Allegro risoluto

Variations on a Theme by Handel, Op. 107

Another welcome reissue from Neil Smith, one of Britain's finest classical guitarists. He plays guitar music by Niccolo Paganini, Mauro Giuliani, Fernando Sor and Isaac Albéniz, introducing in these performances a number of his own improvisations, a lost feature of the romantic era.

Paganini was the greatest of violin virtuosi but he was also a master guitarist and composer for the guitar. The Grand Sonata has three movements: a bold Allegro Risoluto then an exquisite Romanza and finally a set of variations marked Andantino Variato.

Giuliani’s Variations Op 107 are taken on a theme by Handel, known generally as ‘The Harmonious Blacksmith’. Fernando Sor’s Les Adieux is just one of a number of pieces reflecting on losses during his lifetime. Albéniz’s Cadiz has the jaunty air of a seaport whereas Torre Bermeja reflects on the images of the great crimson towers of The Alhambra in Granada as multitudes of notes imitate the Moorish decor.