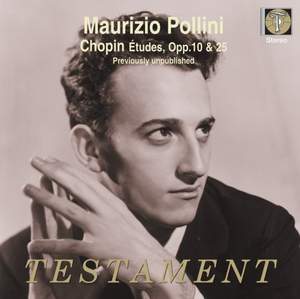 No.4 in C sharp minor

No.6 in E flat minor

No.6 in G sharp minor

No.7 in C sharp minor

In the run-up to the great Italian pianist’s 70th birthday, Testament release a very early recording of the Études Opp. 10 & 25 (recorded when Pollini was just 18), and Deutsche Grammophon issue his complete Chopin recordings from 1972 to 2008.

This outstanding recording of the complete Chopin Études by Maurizio Pollini is being published for the first time by Testament.

It was made by EMI at Abbey Road a few months after Pollini had won the Chopin Competition in Warsaw. Pollini had already recorded for EMI the Chopin Piano Concerto No.1 in E minor with the Phiharmonia Orchestra conducted by Paul Kletzki, a recording universally acclaimed as a classic. Peter Andry, who produced the recording of the Études, later recalled Pollini’s play-through of the first set as a spine-tingling experience: “This was pianism of the very finest kind” he said. “Rarely had I heard such perfection. He seemed to play these demanding works effortlessly. I remember the occasion even now as one of my greatest musical experiences.”

The recording reproduces with striking immediacy and clarity a performance that captures the 18-year-old pianist’s sensitive and sympathetic emotional response to these works. It is very different to the large-scale and grandiose DG recording made a decade or so later by Pollini as a more mature artist in a venue with a more reverberant acoustic.

Critics and pianists who have already heard this recording by the young Pollini have all been astonished by its musicality and spontaneity, qualitities that go right to the heart of Chopin’s genius in writing these challenging but musically inspired compositions. It is a unique addition to Pollini’s extensive recorded catalogue and shows this great artist at the very beginning of his professional career as a musician of the highest calibre.

it is surely astonishing that Pollini could reject his early superfine brilliance,his aristocratic musicianship, his patrician ideal in the Chopin Etudes...What superb articulacy in, say, Op. 10 Nos 2, 4 and 5, and what awe-inspiring assurance and uncanny technical perfection in the treacherous double notes of No 7...All lovers of great piano-playing will need to add this to their collection

this earlier account is a quite extraordinarily revelatory experience...Recorded when he was just eighteen years old, this exceptional recording has such a clarity and a feeling of freshness about it...Quite why Pollini didn’t want this recording to be released is a bit of a mystery, but I must say I’m very glad that Testament has issued it, and I would go as far as to say that in many ways I actually prefer it to the DG recording.

It's utterly superb: there's a freshness about Pollini's playing, a spontaneity that's absent from his more magisterial later Chopin, and his technique is even more dazzling, too. If there's a more naturally musical and immaculate recording of the Studies than this 1960 account, then I have yet to hear it.