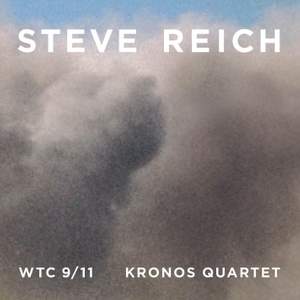 WTC 9/11 finds him on oustanding form: his skilful selection and manipulation of sounds resources has created an emotionally raw evocation of the shock, terror and sheer incredulity of that day.... — BBC Music Magazine More…

Nonesuch releases Pulitzer Prize-winning composer Steve Reich's WTC 9/11 on September 19. The album marks the 10th anniversary of the terrorist attacks on the World Trade Center, which is the subject of Reich's piece. Commissioned for and recorded by Kronos Quartet, WTC 9/11 is scored for three string quartets and pre-recorded voices. The album also includes Reich's Mallet Quartet, performed by Sō Percussion, and Dance Patterns, featuring members of Steve Reich and Musicians, as well as a DVD with a live performance of Mallet Quartet by Sō Percussion.

WTC 9/11 reflects on the World Trade Center attacks of September 11, 2001, when Reich and his family lived only four blocks away from the site of the tragedy. "On 9/11 we were in Vermont, but our son, granddaughter, and daughter-in-law were all in our apartment. Our phone connection stayed open for six hours and our next-door neighbors were finally able to drive north out of the city with their family and ours. For us, 9/11 was not a media event," the composer says.

The piece is scored for three string quartets; Kronos recorded all three parts for the album. WTC 9/11 also uses pre-recorded voices, the speakers' final vowels and consonants elongated in a stop-motion sound technique that Reich says is the "means of connecting one person to another-harmonically." Those voices and their texts belong to NORAD air traffic controllers, as they raised the alert that the airplanes were off course; FDNY workers on the scene; friends and former neighbours of the Reichs, recalling that day; and women who kept vigil, or Shmira, over the dead in a tent outside the Medical Examiner's office, reading Psalms or Biblical passages. The relationship between Steve Reich and Kronos Quartet spans more than 20 years. This is the third quartet the composer has written for Kronos; all three have been recorded by Nonesuch.

Mallet Quartet (2009), co-commissioned and performed by Sō Percussion, is scored for two vibraphones and two five-octave marimbas. The New York Times said of a recent Carnegie Hall performance: ‘Sō Percussion's energetic account... pointed up one of Mr. Reich's current modes of propulsion: a two-tiered approach in which the rhythmically repetitive backdrop that listeners hear as Minimalist (and as the music's distinctively Reichian signature) is offset by restless, melodically adventurous top lines. There were other contrasts here: the repeating figures, for marimbas, were dark and subdued, with a warm, wooden tone; the themes, played on vibraphones, were cool, bright and lively.’

Dance Patterns (2002) is Reich's contribution to Thierry de Mey's film Counterphrases of Anne Terese de Keersmaeker's Choreography, for which several composers wrote short pieces. While the film was shown, the music was performed live by the Ictus Ensemble, which commissioned all the music. Scored for vibraphones, xylophones, and pianos, Dance Patterns features members of Steve Reich and Musicians on the Nonesuch recording.

WTC 9/11 finds him on oustanding form: his skilful selection and manipulation of sounds resources has created an emotionally raw evocation of the shock, terror and sheer incredulity of that day. Mallet Quartet (2009) and Dance Patterns (2002) are quintessential Steve Reich, instantly recognisable from their patterns and textures...but, again, the familiar is re-vivified in these fresh, sparkling and agile pieces.

Reich is as eloquent as ever in the nuts-and-bolts music of WTC 9/11. The exploration of the tiny inflections of sampled speech and Reich’s skilful knitting of the voices to one another – of air traffic controllers, emergency service personnel, the composer’s own Manhattan neighbours and a woman who kept vigil over the makeshift morgues – is unfailingly moving...the Kronos Quartet, taking all three quartet parts, plays with beautiful humanity and effortless nuance.

Reich's sincerity is beyond question

The whole piece [WTC 9/11] is a chilling recollection. There is nothing emollient about the quartet sound and quite rightly not a whiff of sentimentality.

[WTC 9/11 is] short – 15 minutes – but perfectly proportioned...[Mallet Quartet is] almost like a glance back to Reich's music of the 1970s, with the dense, uniform soundworld, many of the textures generated from interlocking canons, and much less harmonic movement than in most of his recent pieces. But like everything he writes, it's wonderfully lucid, and calculated precisely.

his use of repeated vocal samples harks back to early experiments like It's Gonna Rain; but here, the pitches and tempos of the speakers' inflections are eerily echoed by the strings, evoking a sense of fatalism as the initial uncertainty gives way to shock, then horror, over the three movements.

Spoken memories of 9/11 give the first piece the urgency of a documentary, while the music, played with an appropriately heavy, harsh tone, brings a note of stoical endurance and burning anger...Mallet Quartet and Dance Patterns display Reich’s innocent pleasure in superimposing dancing rhythmic patterns over louche jazzy chords. The performances are superb.