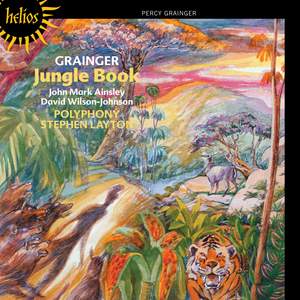 This series is the richest treasure trove an Anglican musician or English choral buff could hope to find. Texts and notes are an Anglophile’s dream. Sound is stunningly rich and ringing — American Record Guide More…

Extract. When Jesus our Lord

Ouseley: From the rising of the sun

Complete. Ascribe unto the Lord

I. Here is the little door

Eccard: When to the temple Mary went

Hyperion’s long series of St Paul’s recordings is graced by an addition dedicated to music for Epiphany, a companion disc to Advent at St Paul’s. In the Christian Church year, Epiphany is the period after Christmas commemorating the manifestation of Christ to the Magi, celebrated on 6 January.

The programme embraces music from the sixteenth to the twentieth century, from Bach to Bingham, and includes many long-established favourites by Wesley, Cornelius, Howells and others.

This series is the richest treasure trove an Anglican musician or English choral buff could hope to find. Texts and notes are an Anglophile’s dream. Sound is stunningly rich and ringing

The choral tone is pleasant, the soloists are well chosen, and the recorded balance keeps everything in perspective

Luminous with a sense of goodness and well-being, brightest and best of choral records for the last many months … a distinguished record

Hurrah for John Scott and St Paul’s, who with this wonderful CD remind all how glorious the Epiphany repertoire is … every piece is approached as if it were the finest thing ever written, and joy is taken in rendering the simple beautiful … let us rejoice at the richness of this programme

This sequence, first released a decade ago, of 17 hymns and carols for Epiphany admirably avoids seasonal cliché (these aren’t Christmas carols, after all) and, more than that, offers an intermittent stiffening of sublime polyphonic music by Byrd and Marenzio...Holst’s eight-part Nunc dimittis is particularly invigorating.