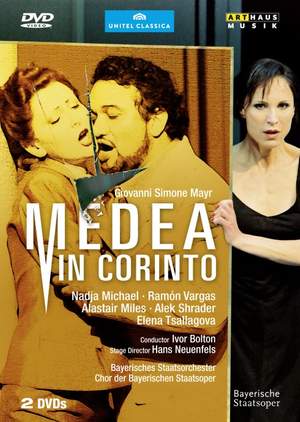 Bolton conducts a performance in which there is no relaxing of the story of these unsavoury folk...[Michael] is on good vocal form, powerful on high and even using an occasional touch of chest-voice:... — International Record Review, November 2011 More…

Giovanni Simone Mayr‘s „Medea in Corinto“ is „the most absolutely amazing opera discovery in decades“ (Frankfurter Allgemeine Zeitung). A triumph for the Bavarian State Opera, the work was staged with a roster of top vocalists headed by Nadja Michael and Ramon Vargas in a production crafted by one of the leading directors of our time, Hans Neuenfels, and with a musical director in demand all over the world, Ivor Bolton.

Born near Ingolstadt, Germany, in 1763, Mayr moved to Italy around 1787 and became one of the most important composers of Italian opera between Mozart and Rossini. He also taught many reputable composers, such as Donizetti. Written at the dawn of romanticism and the bel canto era, his main works unite stylistic characteristics of Viennese classicism with Italian melodic exuberance. „Medea in Corinto“ was premiered in Naples in 1813. Although his works are largely forgotten today, they were played by all major theaters in Europe during his lifetime. Based on the ancient tragedy of Medea, who kills her children in a mad act of blind revenge against her faithless husband, the work deals with timeless subjects. Medea, a powerful woman whose fierce independence and passion strike fear in the hearts of men, is an outsider who is rejected by society. Director Hans Neuenfels stages this tragedy of betrayed love, lust for power and murderous hatred as a fascinating socio-political thriller - the ever controversial director interweaves scenes of gripping brutality into the action.

As Medea, soprano Nadja Michael – „one of the most celebrated German sopranos of our day“ (Die Welt) – breathes fire into her role and dominates the stage with her coloraturas. On a par with Michael is Mexican tenor Ramón Vargas as Giasone, Medea‘s ex-husband. The vigorous early-music specialist Ivor Bolton – who conducted epoch-making Handel performances in Munich – plumbs the depths of Mayr‘s rich score. Is „Medea in Corinto“ one of the first chapters in a Mayr renaissance?

BONUS: Making of // interviews with the cast and production team // rehearsal and backstage footage // about the life and work of Giovanni Simone Mayr

Bolton conducts a performance in which there is no relaxing of the story of these unsavoury folk...[Michael] is on good vocal form, powerful on high and even using an occasional touch of chest-voice: probably retained from her time as a mezzo. There is venom but also a freedom that enables her to deal effectively with quicker flights. Her acting conveys Medea's anger, envy and desire for retribution.