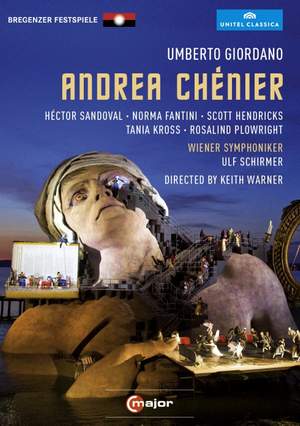 After the huge success of Aida, here is the spectacular new production from the Bregenz Festival 2011.

Girodano Umberto’s Andrea Chénier is set against the backdrop of the horrors of the French Revolution and tells the tragic tale of a doomed love affair involving the historical figure of the poet Andrea Chénier, who initially champions the Revolution but later turns against its leaders, before ending up on the scaffold.

this unusual production’s pluses outweigh the minuses... the three principals have powerful and skilled voices. I was especially impressed by Hector Sandoval in the title role. He looks the part, acts naturally and sounds suitably heroic, especially in the showpiece final lovers’ duet