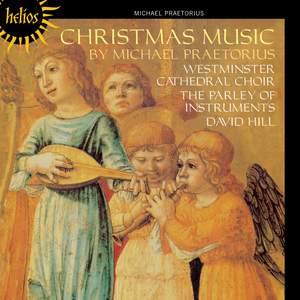 Michael Praetorius was a hugely versatile German composer. His 1603 post as Kapellmeister in Wolfenbüttel necessitated extensive travel throughout Germany, enabling him to establish widespread acclaim as a conductor and musical advisor. Praetorius’s church music is much less known today than it should be, partly because of the sheer volume that he composed.

This beautiful selection of hymns, chorales and carols attempts to reproduce the effect of a performance under Praetorius’s direction; soloists are drawn from the choir and instruments of late sixteenth- or early seventeenth-century design are used.

My favourite ever Christmas recording. Lovely music, done with affection and great sympathy