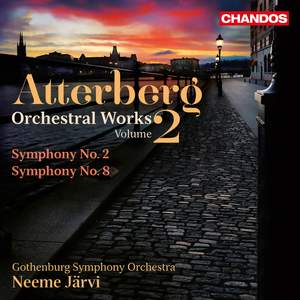 Neeme Järvi and the Gothenburg Symphony Orchestra present Vol. 2 in their series of the Symphonies of Atterberg. It is part of a larger recording project focussed on Scandinavian music, which has already seen Neeme Järvi give highly regarded performances of works by the Norwegian composers Halvorsen and Svendsen with the Bergen Philharmonic Orchestra. During his lifetime, Kurt Atterberg was the most renowned Swedish composer both at home and abroad, as well as a successful conductor, critic, and administrator. He was a composer of clearly structured and brightly melodic music, whose large orchestral output includes nine symphonies, of which the Third and Sixth have already been released.

Symphony No. 2 was started in 1911 when the twenty-four-year-old Atterberg was still a student of engineering. It was originally conceived and premiered as a two-movement work, but after a hostile critical response Atterberg added a third movement. Like much of Atterberg’s music the symphony is deeply rooted in tradition, following classical forms closely but filling them with harmonies and melodies inspired by Swedish folk music. Atterberg composed the Eighth Symphony in 1944. It features a rich tapestry of Swedish folk material which Atterberg gave fresh harmonies. A playful, vigorous, and light piece, the symphony was well received at its premiere in 1945, even soliciting a congratulatory telegram from Sibelius.

Jarvi ups the tempi considerably, reining in the cental climax to throw the expressive weight on to the final bars...I look forward to Jarvi's third instalment.

Järvi’s approach...vividly evokes the natural elements of the Symphony, the movement of Swedish waters, birdsong and flight (wild geese?). There is so much more of a sense of cinematic splendour in Järvi’s reading.