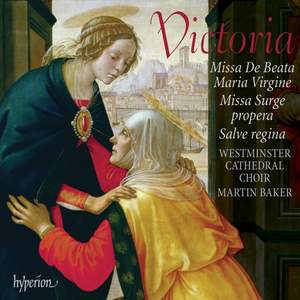 They are nearly 30 strong and go for a particular type of effect - full-bodied, monumental, and replete with the best type of churchy, echoey sound, designed to transfigure a large building. — BBC Music Magazine, December 2011, 3 out of 5 stars More…

Following the success of the Westminster Cathedral Lay Clerks in their sumptuous men-only recording of Victoria’s Missa Gaudeamus, the choir returns to full ranks for a further issue in their survey of the Masses of this undisputed Master of the Renaissance.

This new recording opens with Victoria’s five-part setting of the Marian antiphon Salve regina, followed by two of the composer’s Masses: Missa De Beata Maria Virgine and Missa Surge propera, which is preceded by its Palestrina model.

Released to mark the conclusion of a highly successful American tour, this album finds the choir in superb voice and the thrillingly involved sound is perfectly coloured by the Westminster resonance.

They are nearly 30 strong and go for a particular type of effect - full-bodied, monumental, and replete with the best type of churchy, echoey sound, designed to transfigure a large building.

Each syllable and inflection has been obviously been painstakingly prepared; the complex 'Gloria' of the Missa Surge propera is as streamlined and faultless a rendering as one could hope to hear. But there's a chilly churchy reserve about a performance that herds everything towwards the emotional central reservation...but of course, there are many listeners for whom those criticisms are in fact positives.

The Choir of Westminster Cathedral is on good form here...[the recording] distances the choir to such an extent that details are sometimes lost, and the lush vibrato of some lower voices (the basses in particular) adds a further halo of imprecision. Those who prefer to view the High Renaissance through this particular prism will not be disappointed; but those for whom Victoria is a passionate animal...may have wished for soemthing more focused.

Martin Baker has a lovely way with the musical phrases, letting them emerge from the dark recesses of the cathedral...It creates a sense of great timelessness and awesome splendour which does the music far greater service than something more focused on specific details...generally Baker's tempos are sufficiently measured to avoid too much being cast into the acoustic melting pot at the same time.

a few moments of unruliness apart, the performances of both the masses here are thoughtful and beautifully shaped, and neither the plainchant-based Missa de Beata Maria Virgine nor the parody mass Missa Surge Propera, based upon a Palestrina motet, has been recorded many times before.