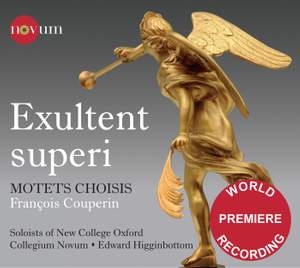 Oxford musicians have always studied historical styles through imaginative composition, and Higginbottom is master of the craft. I couldn't fault his instrumental reconstructions. They're totally... — BBC Music Magazine, March 2012, 5 out of 5 stars More…

This latest release from NOVUM is a CD of motets by François Couperin (1668-1733), the greatest figure in the French musical scene of the early 18th century. Everybody knows his fabulous harpsichord pieces, few his equally fabulous motets. Why? Many of them were effectively lost for over 200 years, and some have survived only in incomplete form. As a result, the motets are a sorely neglected part of his output. This New College release puts that right. Something like half the CD is of music never before recorded. The incomplete sources - violin parts lost soon after composition - have been reconstituted here by Edward Higginbottom, musicologist as well as Director of New College Choir.

The CD features solo voices from New College Choir, including two exceptional trebles and a real hautecontre, together with an instrumental ensemble of distinguished baroque players, the whole ensemble directed from the keyboard by Edward Higginbottom.

Oxford musicians have always studied historical styles through imaginative composition, and Higginbottom is master of the craft. I couldn't fault his instrumental reconstructions. They're totally convincing - tightly integrated with the vocal lines, inventive within the constraints of Couperin's style, and reflecting the moods of the text. The performance is astonishing.

Seven soloists from New College Choir showcase this music with impressive ease. The star turns are some astoundingly assured and mature singing from treble Jonty Ward, delicious haute-contre work from Guy Cutting that ought to ensure interest from other Francophile ensembles, and a fine delivery of Ad te levavi from bass George Coltart, but truth there are [sic] no weakness here