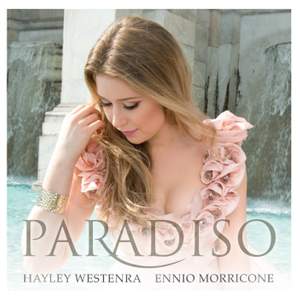 The icicle-voiced star shows no sign of flagging in her tenth year of professional singing...Her extraordinary range and interpretative skills are in full flow - you'll be impressed by the tongue-twisting... — Classic FM Magazine, October 2011, More…

Ennio Morricone, Maria Travia: Once Upon A Time In The West

Morricone, E: Cinema Paradiso: Would He Even Know Me Now?

Morricone, E: Deborah's Theme - I Knew I Loved You

Morricone, E: The Edge of Love

Morricone, E: Here's to you

Well known for his iconic film scores including 'The Good, the Bad and the Ugly' and 'Once Upon a Time in the West', Morricone received an honorary Academy Award for his contribution to the art of film music in 2007 and is regarded as one of the most prolific and influential composers of his era. The album features new compositions written by Morricone for Hayley, as well as some of his best-known film compositions of the last 50 years.

With Ennio making new bespoke arrangements for every track, he produced all of Hayley's vocal performances, as well as conducting each session with his own 120-piece orchestra -- Sinfonietta di Roma. 'Paradiso' marks the first time ever Ennio has allowed -- and in Hayley's case encouraged -- anyone to write new lyrics for his classic themes such as for Gabriel's Oboe (Whispers In A Dream), the theme from the 1986 film classic, 'The Mission'. Hayley has also written English lyrics to two more of the album's tracks: La Califfa and the album's final track, Malena.

Oscar winning lyricist Don Black and Sir Tim Rice and Marilyn and Alan Bergman have all also contributed lyrics to this album.

The icicle-voiced star shows no sign of flagging in her tenth year of professional singing...Her extraordinary range and interpretative skills are in full flow - you'll be impressed by the tongue-twisting Lezione Di Musica and the passionate Portugese fado belter Amalia Por Amor.