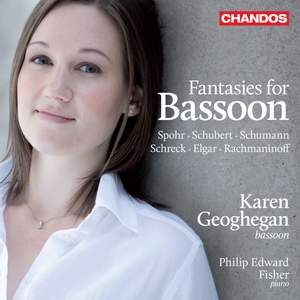 the most substantial music comes in the transcription of Schubert's Arpeggione Sonata...It would be foolish to expect the bassoon to offer the emotional depth and richness of tone that can be... — BBC Music Magazine, February 2012, 4 out of 5 stars More…

Chandos signed Karen Geoghegan as an exclusive artist in 2007 following her appearance on BBC TV’s Classical Star programme. This is her fifth recording with the label, and the expressive maturity and sensitivity of her playing have quickly cemented her status as a rising star, Gramophone writing: ‘Name five internationally famous bassoon soloists. Archie Camden, Gwydion Brooke and, er, that’s it. Except I think we shall soon be adding the name of Karen Geoghegan to the roll call.’

On this disc, she is accompanied by Philip Edward Fisher in works by some of the greatest composers of the nineteenth and early twentieth centuries: Schubert, Schumann, Spohr, Rachmaninoff, and Elgar. Yet, with a single exception, namely the Sonata in E flat by Gustav Schreck, none of the works recorded here were originally composed for the bassoon.

One of Rachmaninoff’s best-loved short pieces, the Vocalise was written for wordless voice and piano. Demonstrating the capacities of the voice as a pure instrument, this work is a prime example of the power of melody without the need for words. In this arrangement, the bassoon takes on the role of ‘wordless voice’, which shows off the instrument’s great lyrical qualities to perfection, as does Elgar’s Salut d’amour.

Schumann’s Fantasiestücke was originally composed for clarinet and piano, its three pieces played without a break, with each subsequent piece taking up and developing melodic ideas from the preceding one. The Sonata in A minor, D 821 by Schubert, which remained unpublished and unperformed for decades after his death, is an emotionally complex work, its moods moving from deep melancholy to excited ebullience.

the most substantial music comes in the transcription of Schubert's Arpeggione Sonata...It would be foolish to expect the bassoon to offer the emotional depth and richness of tone that can be accommodated on a string instrument, but Karen Geoghegan certainly convinces with the melancholic hue of the first movement.

Geoghegan is probably the best advocate the instrument could have: even though parts of the 'Arpeggione' Sonata (usually heard on cello or viola) don't quite work on the bassoon, as the ear adjusts her exemplary musicianship comes through and triumphs...There's a wonderfully natural quality to Geoghegan's phrasing and expression - especially in the Schumann - and she is partnered adeptly at all times by Philip Edward Fisher.

There is no clowning here. If anything, the bassoon lends a pleasant dolefulness to the music played on this CD...Even the cello...is not as consistently mellow as a bassoon, when it is played by a musician on Geoghegan's level.