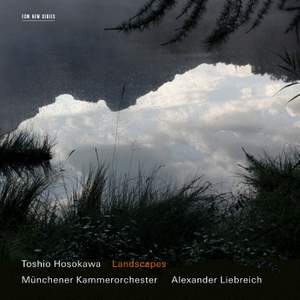 Ethereal music centred on the textures of the shô, either expertly played by Mayumi Miyata, or evoked by the orchestra. — BBC Music Magazine, December 2011 More…

ECM’s ongoing series of recordings with the Munich Chamber Orchestra continues with an intriguing album of new and recent pieces by Japan’s leading composer Toshio Hosokawa. Amongst the compositions are Sakura für Otto Tomek and Cloud and Light, both written in 2008, and Ceremonial Dance (2000). These 21st century pieces are brought together with Landscape V (originally from 1993 and for string quartet, meanwhile expanded into an orchestral version). Three of these feature the shô, a traditional Japanese instrument played by its leading exponent, Mayumi Miyata.

Born in Hiroshima in 1955, Hosokawa was initially inspired by Western art music from Schubert to Schoenberg. He went to Germany in the 1970s to study with Isang Yun and Klaus Huber. As he strengthened his standing in European avant-garde he also put down deeper roots in Japanese traditional music. His work increasingly suggests a dialogue between East and West, between the archaic and modern, between ceremonial music and concert music. Hosokawa considers his compositional process instinctively associated with the concepts of Zen Buddhism and its symbolic interpretation of nature.

Hosokawa’s involvement with traditional music led him to study the shô, the ancient Japanese mouth organ with 17 bamboo pipes. In contemporary music the best known shô player is undoubtedly Mayumi Miyata who is featured here. She was previously heard on ECM in Helmut Lachenmann’s opera Das Mädchen mit den Schwefelhölzern (4761283).

On the present disc Mayumi Miyata solos in Hosakawa’s music for strings and shô, and plays unaccompanied shô on Sakura (Cherry Blossoms), Hosakawa’s adaptation of a traditional Japanese piece.

Landscapes is ECM’s second reckoning with Hosowaka: his music was previously featured on the critically acclaimed Yun/Bach/Hosokawa album of Thomas Demenga (4618622), issued a decade ago.

At present Hosakawa is a name very much in the news in Europe, as his opera Matsukaze, with choreography by Sascha Walz, is at the Berlin Staatsoper and is receiving much positive media attention.

This recording is released simultaneously with another recording featuring music by a major Japanese composer, Toru Takemitsu’s Distance de fée – on the debut CD by Duo Gazzana (4764428)

Ethereal music centred on the textures of the shô, either expertly played by Mayumi Miyata, or evoked by the orchestra.

sho soloist Mayumi Miyata takes a decidedly anti-virtuoso approach, shunning conventional measures of instrumental mastery in favour of almost pure tone and texture. This ends up setting the pace for the performances as a whole...Leibreich essentially guides his musicians - particularly the strings - in sounding as much like the sho as one would ever imagine.

Hosokawa’s music is about gestures, textures and colours. It is poetic and beautiful, always evocative.

it's exquisite in a self-conscious way, with every texture precisely crafted and placed, but that jewel-like quality is achieved at the price of scarcely any dynamism. The sho's reedy chords are either surrounded by proliferating orchestral lines or absorbed into multi-layered textures

Hosokawa's work involves dialogues between East and West, and ancient and modern – here represented in the form of the Japanese bamboo mouth organ, the shô, and the orchestra, respectively...the shô has a gentle, evanescent character whose glistening, high-register drone is emulated in pieces such as "Landscape V" and "Cloud and Light" by the strings of the Münchener Kammerorchester...Exquisite.