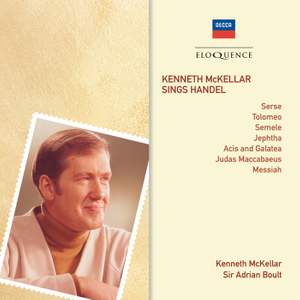 "Love In Her Eyes Sits Playing"

Silent Worship ("Did'st Thou Not See My Lady?")

"Thanks To My Brethren...How Vain Is Man"

"My Arms! Against This Gorgias...Sound an Alarm"

"Comfort ye, My People...Ev'ry Valley Shall Be Exalted"

"All They That See Him...He Trusted In God"

"Thy Rebuke Hath Broken His Heart...Behold and See"

"He Was Cut Off...But Thou Didst Not Leave His Soul In Hell""

"He That Dwelleth In Heaven...Thou Shalt Break Them"

"Then Shall Be Brought To Pass... O Death Where Is Thy Sting...But Thanks Be To God"

Throughout much of the first half of the previous century, entertainer Harry Lauder was, in the words of Winston Churchill, ‘Scotland’s greatest ever ambassador!’ In the following years, Scotland’s next ‘greatest ever ambassador’ (if not Sean Connery!) must have been Kenneth McKellar, who was born in 1927, the son of a grocer, in the Scottish town of Paisley.

From 1959–60 he recorded a series of Handel arias for Decca, with the Orchestra of the Royal Opera House, Covent Garden, conducted by Sir Adrian Boult. Some were issued on an EP and later the entire collection was brought out on an LP. In 1961 he went into the recording studios, again with Boult, for more Handel, this time with the LSO and Chorus, to sing the tenor part in Messiah alongside Joan Sutherland, Grace Bumbry and David Ward.

Collected here are all the arias from the first record, supplemented with additional arias from Messiah. ‘Thy rebuke … Behold and see’ was recorded during the Messiah sessions as an alternative take to the soprano version (Joan Sutherland eventually sang it in the complete recording) and never issued on LP (it first appeared as an appendix to the Decca Eloquence reissue of this complete Boult Messiah). ‘Comfort ye … Ev’ry valley’ comes from the earlier Handel Arias sessions, and receives its first international release on CD.

McKellar died, shortly after being diagnosed with pancreatic cancer, in 2010, while visiting his daughter Jane in the United States. He is buried in Paisley. It is gratifying that his artistry is being rediscovered by a new generation of listeners.

Kenneth McKellar's voice has timeless appeal in this 1960s compilation.