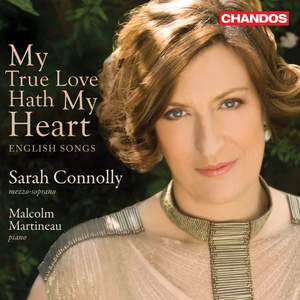 They create a sense of isolation within the sadness of King David; they capture Ireland's responses to the poetry of Hardy, Sidney and Symons with total commitment; and they respond with sentience... — BBC Music Magazine, December 2011, More…

More Songs of the Countryside: No. 1. Foxgloves

Bennett, R R: A History of the Thé Dansant

Sarah Connolly received excellent reviews for her recital performance of ‘English Songs’ on 11 April 2011 at the Alice Tully Hall in New York. The New York Times wrote: ‘Ms Connolly’s voice was strong and steady through its range, velvety, but with a soft, subtle graininess that gave weight and presence to even her most ethereal floated notes.’

Here the mezzo-soprano, accompanied by Malcolm Martineau on piano, performs four arrangements by Benjamin Britten: three folk songs and one song from an early choral work. These complement the recent Britten CD on Chandos, on which Connolly performs the cantata Phaedra as well as A Charm of Lullabies (CHAN 10671).

Next come eleven songs from the 1920s, which is considered the golden decade for English art songs. Among the highlights are By a Bierside, Ivor Gurney’s stark reflection on death, written in the World War I trenches, and Herbert Howells’s King David which has long been considered a masterpiece. Howells himself said: ‘I am prouder to have written King David than almost anything else of mine.’

The most recent contribution to this disc of English Songs is the surreally retro A History of the Thé Dansant by Sir Richard Rodney Bennett, which was published in 1995.

They create a sense of isolation within the sadness of King David; they capture Ireland's responses to the poetry of Hardy, Sidney and Symons with total commitment; and they respond with sentience to Gurney's uniquely eloquent feeling for the inflections of the English language in two of his classic songs

her sense of drama is never overstated. She excels, therefore, in capturing the masculine melancholy of Britten's lullabies and Bennett's brittle, unpredictable scenes from a long marriage. Martineau responds throughout with characteristically flawless, subtle and intuitive accompaniment.

It is good to find an English singer in her prime championing the lesser-known art songs of her native tradition, and making them sound not so much twee as magical: listen to Connolly’s artless handling of Britten’s “Corpus Christi Carol”, the quiet rapture she finds in Howells’s “Kind David”, the fun she has with the Foxtrot from Richard Rodney Bennett’s “History of Thé Dansant”.

Her singing is consistently beautiful in this programme of English songs

One of today’s most intelligent musical mezzo-sopranos, Sarah Connolly is in gloriously fluent and expressive voice for an imaginatively programmed selection of mid 20th-century English song...Malcolm Martineau’s accompaniment is exemplary in its sensitivity.