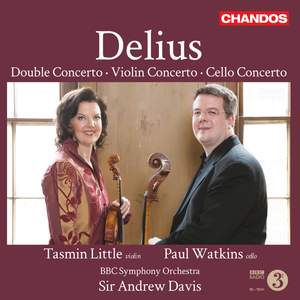 Little is every bit as persuasively expressive as on her earlier recordings with Charles Mackerras. Paul Watkins provides the partnership you'd expect from such a fine chamber musician in the... — BBC Music Magazine, December 2011, 5 out of 5 stars More…

I. With moderate tempo

These three major concertos by Frederick Delius involving solos string instruments are here brought together on the same disc for the first time. The Violin Concerto, Double Concerto, and Cello Concerto are performed by exclusive Chandos artists strongly associated with British repertoire.

Sir Andrew Davis and the BBC Symphony Orchestra have already released one Delius disc this year (CHSA5088 – Appalachia and The Song of the High Hills), of which International Record Review (IRR) said: ‘I am absolutely certain that this is the greatest performance and recording of Delius’ Appalachia which has ever been put on disc... it would be hard if not impossible to imagine a more magnificent performance of this masterpiece... the playing is unfailingly beautiful and infused with sensitivity, brilliance of technique and vividness of colour’.

Tasmin Little, who won the Critics’ Choice Award at this year’s Classic BRIT Awards, is the soloist in the Violin Concerto. This is not a virtuosic showpiece in the ordinary sense; instead the solo part stays harmonically connected with the orchestra throughout; in fact, it seems to grow out of its textures. The work is composed in a single long span, divided into three clear sections in which different moods succeed one another, sometimes passionately spontaneous, sometimes dreamlike, sometimes fiery.

Paul Watkins is the soloist in the Cello Concerto, which Delius regarded as his personal favourite among his concertos. It was the last work that he was able to complete in his own hand before experiencing the onset of the devastating effects of syphilis: paralysis and blindness.

Tasmin Little and Paul Watkins join forces in the rarely performed and recorded Double Concerto, which represents Delius at his most inspired: the work is warmly evocative as well as strong and memorable. The soloists get to showcase their abilities in music that is both passionate and tranquil.

Little is every bit as persuasively expressive as on her earlier recordings with Charles Mackerras. Paul Watkins provides the partnership you'd expect from such a fine chamber musician in the Double, and copes effortlessly with the problems of the original version of the Cello Concerto. Andrew Davis paces everything magisterially, always allowing enough space at moments of hushed stillness.

These studio performances, with two committed soloists accompanied by the BBC Symphony under Andrew Davis, do not put a foot wrong. Paul Watkins invigorates the ‘Cello Concerto’; Tasmin Little captures a strain of lyrical introspection in the ‘Violin Concerto’. But the music meanders – the ‘Double Concerto’ especially.

Not only does she surmount every technical hurdle with ease, her tone remains wonderfully pure and heart-warmingly expressive. Little's partnership wioth Paul Watkins strikes me as an especial success; indeed, theirs is the most tenderly lyrical and raptly spontaneous performance of the Double Concerto to have yet my way...No self-respecting Delian can afford to be without this indispensable issue.

a magical, sensuous flow is the presiding quality of this superior performance by Little. Watkins is no less captivating in the Cello Concerto, and they are superb together in the Double Concerto, with its heart-easing slow second section.

if ever a disc was going to make a case for any of these pieces, it's this one. There is wonderfully idiomatic support from Andrew Davis and the BBC Symphony, as both Tasmin Little's account of the Violin Concerto and Paul Watkins's of the cello work seize every opportunity to inject incisiveness and dramatic shape into the music.