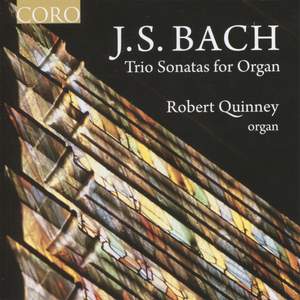 Quinney embraces the transparency of Bach's trios with an ear for their variety, sparkle and cogency. The Frobenius organ at Queen's College, Oxford, provides him with an enticing palette of... — BBC Music Magazine, December 2011, 4 out of 5 stars More…

Continuing its work with the rising stars of the early music world, CORO is delighted to be releasing a brand new recording by one of The Sixteen Orchestra’s principal members - organist Robert Quinney.

Recorded at The Queen’s College, Oxford, on the beautiful Frobenius Organ (one of the most notable instruments of its kind in the country), the Trio Sonatas are among Bach's most popular and appealing organ works. Complied in the composer’s later years, perhaps as studies for his eldest son Wilhelm Friedemann, the Trio Sonatas are a unique set of works in the organ repertory. Bach transferred to the organ the Italian trio sonata with its two treble voices and bass continuo; for the organ works, Bach uses right hand, left hand, and pedal.

Robert Quinney is Sub-Organist of Westminster Abbey and played at the Royal Wedding of Prince William and Catherine Middleton in April. In addition to his daily work at the Abbey, he maintains a busy freelance schedule as a soloist and ensemble player, and is also Director of Oundle for Organists, whose residential courses offer inspiring tuition for young organists. His double compact disc The Grand Organ of Westminster Cathedral, recorded in 2004, was Instrumental Disc of the Month in BBC Music, earned a 5-star review in the French journal Diapason, and was an Editor’s Choice in Gramophone.

“Alongside his impeccable performances, Quinney’s greatest achievement is to produce music-making which really communicates itself to the listener’.” GRAMOPHONE

Quinney embraces the transparency of Bach's trios with an ear for their variety, sparkle and cogency. The Frobenius organ at Queen's College, Oxford, provides him with an enticing palette of sounds, while its mechanical security allows Quinney's lucid and carefully articulation to emerge without compromise.

Needless to say, Quinney delivers finger- and foot-perfect performances...[He] projects the first movements with a light touch, allowing their intricate, tuneful beauty to shine brightly...With all the repeats observed, this makes for a very full disc but one which is highly satisfying.

The sound is fluting, crystalline, limpid, yet not without power and profundity. Adapting the Italian chamber-music genre, the trio sonatas are each in three movements, yet with an individual cast. Perfect they may be, but intimate, too, the disc a pure unfolding of pleasure.