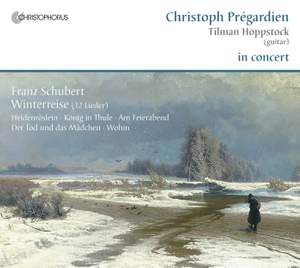 With its different weight, measure and dynamic voicing, the guitar simply cannot recreate Schubert's subtle patterning of keyboard-conceived inflection and accenting...The guitar comes into its... — BBC Music Magazine, December 2011, 3 out of 5 stars More…

The present collection of Schubert Lieder contains the only recording of a live concert by Christoph Prégardien. The CD contains Lieder recorded in two concerts during 2003 and 2006 when Prégardien was at the peak of his vocal career.

After Songs of love & death this CD is the second recording with Christoph Prégardien accompanied by guitar. The accompaniment of the Romantic Lied by guitar was well accepted by Schubert’s contemporaries and the guitar itself was pretty en vogue in these times. In Prégardien’s opinion Schubert’s Lieder are closely connected with the intimate sound of the guitar.

Tilman Hoppstock has selected 12 Lieder of Winterreise and five others and arranged them for his instrument.

With its different weight, measure and dynamic voicing, the guitar simply cannot recreate Schubert's subtle patterning of keyboard-conceived inflection and accenting...The guitar comes into its own, though, in the bleak, hurdy-gurdy accompaniment of 'Der Leiermann'. Prégardien's singing is just as intelligent and sentient as ever.