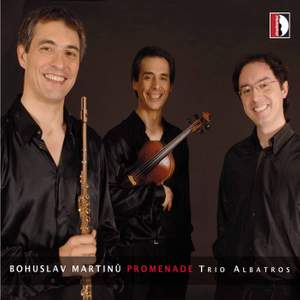 Nowadays Bohuslav Martinu ranks alongside Bedrich Smetana, Antonín Dvorák and Leoš Janácek as a true giant of Czech music. This intriguing collection of chamber works is entirely dedicated to his genius. The Madrigal Sonata originated to mark a specific event – the 20th anniversary of the League of Composers in New York – and was performed soon after being completed, on 9 December 1942. The entire two-movement Sonata, inspired by the madrigal’s compositional patterns, is characterised by lightness and wit, its form and instrumentation unburdened by any heaviness. The Sonata No.1 is one of Martinu’s last “jazz” works. As in the case of Stravinsky, Satie and Milhaud, Martinu’s affection for American jazz is most evident in his chamber music. The Promenades are a cycle of four brief movements, brilliant pieces replete with the atmosphere of idyllic promenading through the parks and lanes of Paris. For this trio, Martinu engaged not the piano but the harpsichord, thereby recalling the Baroque ensemble of the pre-classical period. This piece comprises everything Martinu’s pre-war compositional period was noted for:elements of Czech and Moravian folk music; exquisite manipulation of instrumental timbres; use of polyphonic textures. The Sonata for flute and piano exhibits Martinu’s elegance of style in its clarity of design, harmonic richness, and contrapuntal ingenuity. When listening to the Sonata for flute, violin and piano and examining the score, the well-arranged structure, the clear inner segmentation of the individual movements and the natural melodic motifs in the instrumental parts confirm the composer’s inclination to Neoclassicism.