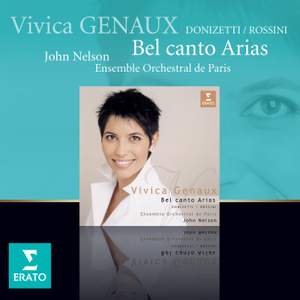 Rossini, Bellini, Donizetti: these three men alone sufficed to popularise the art of Italian opera during the first half of the nineteenth century, a century so propitious to the spread of romanticism in all its manifestations.

If we set aside Bellini, who flashed across the sky like a meteor, this leaves Rossini and Donizetti, and the differences between them are patent. Rossini was born in Pesaro in 1792 and died in Paris in 1868. His stage career began in 1810 in Venice with a ‘farsa’, Il cambiale di matrimonio, establishing immediately the high standard which he maintained without faltering until he suddenly stopped writing operas in 1839. His last opera was Guillaume Tell which failed to convince the regular audience at the Paris Opéra, unresponsive as they were to its ground-breaking aspects. Rossini’s decision to stop has given rise to endless speculation, but the most likely explanation is that he had grown weary of seeing audiences’ tastes changing and forsaking the ideal of vocal beauty for which he always strove.

Donizetti’s life was shorter, and more full of drama – though we should no longer see Rossini, who suffered from depression, as a jovial fun-lover, a popular but misleading view. Donizetti was born in Bergamo in 1797 and died there in April 1848. A pupil of Giovanni Simone Mayr, he had a very full professional life which was nevertheless marred by sorrow and illness. He produced over seventy-five operas of all kinds from comic to tragic and, like Rossini, his career took him to Paris.

Surprisingly, much of Rossini’s output is not well known. The image of him which mainly springs to mind is linked to the comedies La Cenerentola, L’italiana in Algeri and above all Il barbiere di Siviglia, an undisputed masterpiece and in a way his emblematic work. But this is to leave out a large number of significant works, his opere serie, which are rarely performed today despite their outstanding qualities. The type of female voice Rossini preferred was the contralto (a term to be understood in the context of its time, when vocal nomenclature was far less precise than today), with a sumptuous, opulent low register, tawny amber colours and a full, rich sound. Although the contralto’s high register was at first only rarely called upon, she was not confined to viragos or trouser roles; for certain parts she had to be capable of moderating and lightening her naturally full-bodied instrument. When the writing moves into the upper range it takes on similarities with the mezzo-soprano, as well as slightly more femininity.

The disappearance of the castrati at the start of the nineteenth century encouraged the fashion for the contralto. Rossini was probably harking back to the golden age of the castrato when he wrote some of his finest serious roles, such as Arsace in Semiramide. This was written for Rosa Mariani, who performed it for the first time in Venice in 1823 opposite the composer’s wife Isabella Colbran as the Queen of Babylon. It is a magnificent role, that of a courageous young man of whom the queen is enamoured and who, by the most unhappy mischance, turns out to be her son, and, even more unfortunately, the involuntary cause of her death. ‘Eccomi alfine in Babilonia… Ah! quel giorno’ is his entrance aria, classically structured in three parts, recitative, slow section, quick section: certainly a bravura piece, but one in which the singer has to give expression to feelings as varied as ardent love and fear of the future. Even finer, and more intensely poetic, is Malcolm’s ‘Mura felici’ from La donna del lago, a Scottish tale over which hovers the shade of Sir Walter Scott, so dear to nineteenth-century opera. In 1819, at the San Carlo in Naples, Rosmunda Pisaroni captured the dream-like essence of this aria so perfectly that the smallpox blemishing her face was entirely forgotten.

But the contralto can also play the woman – especially of the strong-willed, courageous type, like Isabella in L’italiana in Algeri, a difficult part which, in Venice in 1813, gave Marietta Marcolini the chance to shine. The role exhibits throughout a blend of charm and virtuosity, unabated energy and unshakable good humour, whether at Isabella’s entrance in Act I, cursing her fate before sharpening her weapons of seduction (‘Cruda sorte’) or exhorting her beloved, before the finale, to behave like a true Italian (‘Pensa alla patria’). For the final rondo of La Cenerentola, the voice lightens, using less of its lower register; Angelina’s goodness and joie de vivre shine through. At the world premiere in Rome in 1817, Geltrude Giorgi-Righetti took the part. A year earlier, also in Rome, she lent her personality to the exuberant Rosina in Il barbiere di Siviglia, who displays her determination to marry Lindoro in ‘Una voce poco fa’.

Donizetti followed a different path both musically and theatrically. The idea of opera as simply a feast of singing begins to fade before dramatic urgency; the power of song alone is no longer enough, and words come into their own. Can we still speak of ‘bel canto’? The same devices are used, the same ornamentation, the role of colour, nuance, dynamics and contrast, but they are regarded more as a means than as an end in themselves. At the Teatro Carcano in Milan in 1830, Anna Bolena was enthusiastically received. This time the contralto (Amalia Laroche) again had a trouser role, the page Smeton; we can perhaps see something of Cherubino in this adolescent boy who is far from indifferent to Anna’s charms (‘È sgombro il loco’, from Act I, Scene 1). The Victor Hugo-inspired Lucrezia Borgia was not to the liking of either the poet or the censor. Its hero Orsini is yet again a trouser role (one of Marietta Brambilla’s parts at La Scala, Milan, in 1833); he launches the plot in the prologue by telling his friend Gennaro that they will both be killed by Lucrezia Borgia – ‘Nella fatal di Rimini’. Later, during the fateful banquet of the final act he sings a brindisi, a drinking-song with a catchy rhythm which was immensely popular at the time (‘Il segreto per esser felici’); its second verse lends itself to brilliant ornamentation.

Alahor in Granata was first staged by the Teatro Carolino in Palermo in January 1826, but the work was forgotten throughout the twentieth century until the Teatro de la Maestranza in Seville revived it for the opening of its 1998 season. It is a youthful work, though it came after some remarkably accomplished efforts such as the delightful L’ajo nell’imbarazzo (1824), itself preceded, in 1822, by Zoraide di Granata, another picturesque piece drawn from Spanish history. The trouser role here is that of King Muley-Hassem (first performed by Marietta Gioia-Tamburini), who is in love with Zobeida, a member of an enemy tribe, the Abencerrages. Here, the king appears in the role of peace-maker; his efforts put an end to the war and win him his beloved. There could be no better way to round off this gallery of portraits devoted to a voice distinguished, among other qualities, by its rarity.