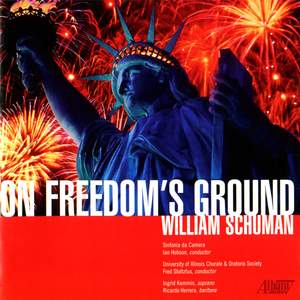 The four compositions on this disc effectively portray both sides of William Schuman’s musical personality — from the spirited energy of American Festival Overture and the uninhibited patriotic fervor of A Free Song to the much darker character of Prelude and the profoundly moving On Freedom’s Ground. One of the 20th century America’s most important composers and arts administrators, William Schuman (1910-1992) went from being a Tin Pan Alley song plugger to professor at Sarah Lawrence to president of Juilliard and finally, to president of Lincoln Center. With the exception of the oft-recorded American Festival Overture, these are world premiere recordings and represent the many sides of this extraordinarily creative musical mind. Joseph Polisi, the current president of Juilliard and author of American Muse: The Life and Times of William Schuman has provided the notes.