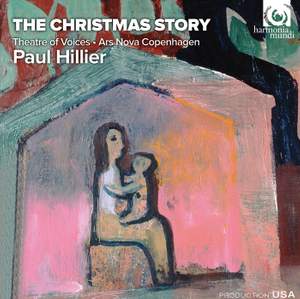 Ranging from plainchant and motets to 17th Century dialogues and contemporary carol settings, it sounds like it may come across as a bit of a hotchpotch. But it doesn’t at all and with singing... — Chris O'Reilly, Presto Music, 5th December 2011 More…

Hopkins, J H: We three Kings of Orient are

Inspired by the much-loved service of ‘Nine Lessons and Carols’ given every Christmas Eve, this recording presents the Nativity story told through plainchant, motets, 17th Century dialogues and traditional folk carols.

Paul Hillier leads Theatre of Voice and Ars Nova Copenhagen in music he has culled and arranged from Italian, German, Danish, English and American sources.

Ranging from plainchant and motets to 17th Century dialogues and contemporary carol settings, it sounds like it may come across as a bit of a hotchpotch. But it doesn’t at all and with singing of the absolute highest calibre I was transfixed for the whole hour. If you only want to buy one Christmas disc this year, this would be my top recommendation.

As collections of Christmas music go, this one stands out, not only for the impeccably refined and expressive singing, but for the immense breadth of the material it contains...The highlight, for me, is Ars Nova’s beautifully shaped reading of Byrd’s O magnum mysterium.

Tracing a course from Advent through the Nativity and on to Epiphany and Holy Innocents, Paul Hillier has devised a fascinating programme of plainchant, Renaissance music and other apt pieces that poignantly relate the Christmas narrative. Excellent performances bring the sequence vividly to life.

The Independent on Sunday 11th December 2011

Only one work from Carols for Choirs has made it into Paul Hillier's strikingly original Christmas sequence. Pungent arrangements of "Personent Hodie" and "Es ist ein Ros Entsprungen" jostle for space with ancient plainchant...Ars Nova's ripe choral sound outclasses the thready blend of Theatre of Voices.

The 65 minutes are designed to be played at a single sitting: the musically curious – and those of genuine religious impulse – will find much that is deeply satisfying.

This lovely disc offers a Danish take on the traditional English carol service...This needs to be listened to in sequence, in one go, and following the texts leads to a pretty profound, immersive experience. Paul Hillier’s arrangements of traditional carols are unfailingly sensitive; the highlights being a radiant version of the Italian Dormi, dormi o bel Bambino and an account of Liebe Hirten