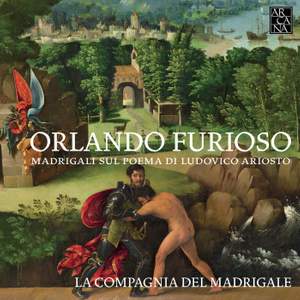 Wert: Chi salirà per me, madonna, in cielo

The texts sung here recount the principal events of Orlando Furioso. The epic poem of the war between Muslims and Christians lies at the heart of the entire narration and concludes with a Christian victory. The tale features the love story between the beautiful Angelica, in flight from her many suitors, including the paladin Orlando. The protagonist goes mad upon discovering the amorous relationship between his beloved and the pagan Medoro, and will only return to his senses thanks to Astolfo, who flies to the moon to recuperate Orlando’s sanity. The poem ends with the encomiastic tale of the star-crossed love between the pagan warrior Ruggiero and the Christian Bradamante. After Ruggiero’s conversion at the end of the war, the couple will succeed in crowning their love and giving birth to the house of the Este.

Other episodes in the poem include Ruggiero’s arrival on the island of the sorceress Alcina, Olympia’s desperation after being abandoned by her unfaithful consort, and the love between Bradamante’s brother Ricciardetto and Fiordispina. Orlando Furioso. From its first appearance in 1516, this knightly epic poem by Ludovico Ariosto has represented one of the most successful works in all of Italian literature.

This recording, fruit of a meticolous, sensitive musical selection, offers a survey of expressive styles and trends which characterized the musical settings of Ariosto’s poem with music during the period of its greatest musical popularity. With, the sole exception of the frottola by Bartolomeo Tromboncino (1517), the musical selections consist entirely of madrigals published between 1541 and 1588.