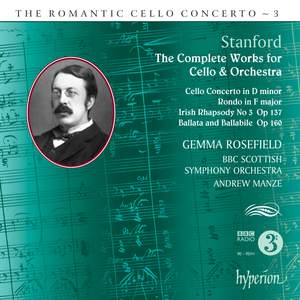 Stanford: Rondo for cello and orchestra in F major

Stanford: Irish Rhapsody No. 3 for Cello and Orchestra Op. 137

Hyperion’s third disc in the Romantic Cello Concerto series sees the brilliant young cellist Gemma Rosefield making her label debut. She was the winner of the prestigious Pierre Fournier Award at Wigmore Hall in 2007 and has garnered great acclaim for her spirited playing.

Irish-born Charles Villiers Stanford is far better known for his choral music, but this disc of rarities reveals the composer’s original orchestral voice and his exceptional understanding of the relationship between soloist and orchestra. His Cello Concerto in D minor, with its continuous thematic development and lilting melodies, was a major landmark in the repertoire of British cello music and the overtly romantic Ballata and Ballabile displays an extraordinary lyricism.

Rosefield gives thoughtful performances throughout, her tone both beautifully consistent and richly hued, and the BBC Scottish Symphony Orchestra play with their usual aplomb. In these recordings it is difficult to understand why such well-proportioned and grateful writing for the solo cello has languished unplayed for so long.

[Rosefield] certainly has technique to burn (try the finale of the Concerto) and is sensitive to mood and atmosphere, delightfully so in the Rondo, but I should have liked a richer, more penetrating tone in the Concerto...Manze brings unexpected authority to the proceedings

[Rosefield] plays with disarming character and freshness; her technique, too, is enviably sure and tone beguilingly rounded...Rosefield and Manze do [the Irish Rhapsody] proud. They also bring a comparable sensitivity and flair to the Ballata and Ballabile, a typically resourceful and charming diptych composed in 1918 for Beatrice Harrison. Admirable sound and truthful balance; another Hyperion winner!