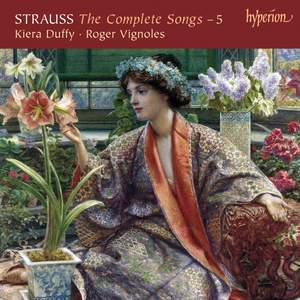 Duffy's is a light, bright soprano with a stylish sense of phrasing and some rapturous top Bs in her armoury...Two stand out: the harmonically wayward 'Junghexenlied', where Duffy has the right... — BBC Music Magazine, December 2011, 3 out of 5 stars More…

I. An die Nacht

A further instalment of this major Hyperion project introduces the American soprano Kiera Duffy, whose performances in the concert hall and on the opera stage have received the highest praise.

This series, skilfully masterminded by the accompanist Roger Vignoles, is carefully shaped around the talents of each singer and strives to serve the cause of both neglected treasures and essential Strauss masterworks. The majority of the music in this beautifully shaped recital was composed between 1888 and 1900, with the exception of the glorious and virtuosic Op 68 Brentano-Lieder, which owes its richness and fluency to the composer’s experience of opera composition.

Duffy gives an impeccable performance, revealing a deep understanding of the complexity of the music, and tackles the final expansive Lied der Frauen with unwavering stamina and faultless intonation. Perceptive booklet notes from Vignoles, and full texts and translations are also included.

Duffy's is a light, bright soprano with a stylish sense of phrasing and some rapturous top Bs in her armoury...Two stand out: the harmonically wayward 'Junghexenlied', where Duffy has the right abrasive edge and hint of witchy malice, and the radiant 'Als mir dein Lied erklang'

She certainly gives a strong interpretation of the six Brentano Lieder, Op. 68, with Vignoles's powerful closing 'Lied der Frauen' a highlight...and both artists are equally impressive in the strongly characterised 'Junghexenlied'...Duffy is also appealing in the gentler songs, such as the tender 'Meinem Kinde', but elsewhere at times one wishes for more varied tonal colour and less climactic passion.

If the songs of Op. 68 are the most immediately compelling Lieder here, there are other treasures too...after an impeccable entry [in 'Morgen!'], Duffy embraces one of Strauss's most heartfelt melodies before darkening her silvery tone to huge effect in the final lines.

The main work here is the Brentano Lieder of 1918, and it is often said that no single soprano can perform the whole cycle adequately. Duffy manages better than most, partly because there is a cutting edge in her tone...Vignoles, the Strauss pianist par excellence, is infinitely supportive and keeps the volume down to a sensible level.

The technically accomplished and conscientious American Kiera Duffy has the clean, bright tone required for the more upbeat numbers such as Kling, but her Morgen doesn’t float through the ether and elsewhere she can sound a little hard-edged.