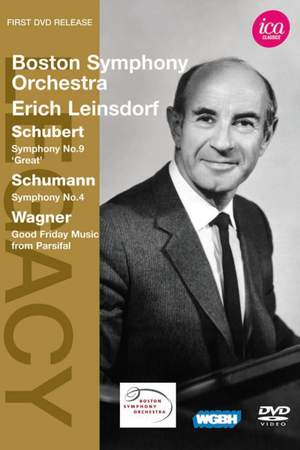 This series of DVDs will make the publicly broadcast BSO concerts from this era available for the first time since they were broadcast.

This material represents some of the earliest televised concerts with the Boston Symphony and Erich Leinsdorf, and has been restored using the greatest care and state-of-the-art techniques.

It is of exceptional musical interest and rare historic value.

A particular favourite of Leinsdorf’s, the Schumann is both powerful and precise under Leinsdorf’s direction, whilst the Wagner is a warm and sensitive rendition from a great Wagnerian conductor.

Two of ICA’s BSO DVDs featuring Charles Munch as conductor have been awarded the Diapason d’Or in France’s Diapason magazine.