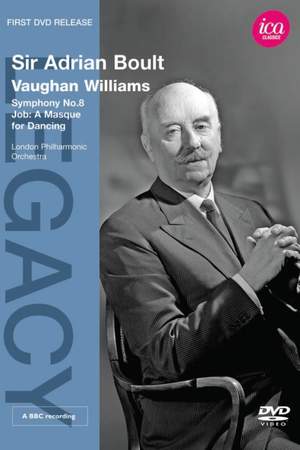 Renowned for his interpretations of English works, Sir Adrian Boult (1889–1983) was a master of the baton and one of Britain’s leading conductors. He had a great love for and understanding of the music of Vaughan Williams, who was said to be ‘totally in favour of Sir Adrian’s approach to his music’ (John Culshaw).

Vaughan Williams was a close friend of Boult, to whom he dedicated ‘Job: A Masque for Dancing’, a work that has been hailed as one of the English composer’s greatest achievements. Boult made four commercial recordings of Job, the first in 1946 with the BBC Symphony Orchestra, followed by two with the LPO in 1954 and 1958, and the last in 1970 with the LSO.

As a champion of English Music, and of Vaughan Williams in particular, Boult was the natural choice to conduct this centenary concert to mark Vaughan Williams’ birth, which he did in his capacity as president of the LPO fifteen years after he had stepped down as its Music Director, in a period described as his ‘Indian Summer’. A conductor who made many recordings, Boult’s version of Vaughan Williams Symphony No.8 for EMI is hailed as ‘vivid and fresh’ in the Penguin Guide, whilst his interpretations of other RVW symphonies are described as ‘warm and mature’, ‘full-bodied and well focussed’.

Classic performances - a treasurable recording of a moving occasion

In one sense, he is the least interesting of conductors to watch, the very antithesis of Bernstein's terpsichorean style and perhaps only rivalled in economy of gesture and facial expression by Richard Strauss; on the other hand, one constantly wonders how he achieves the miraculous effects he does by such minimal means.