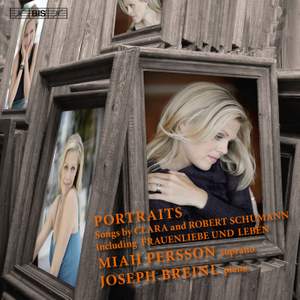 No. 1. Ich stand in dunkeln Traumen

No. 2. Nach der Geburt ihres Sohnes (After the birth of her son)

No. 3. An die Konigin Elisabeth (To the Queen Elizabeth)

No. 4. Abschied von der Welt (Farewell to this World)

No. 4. Du Ring an meinem Finger

No. 7. An meinem Herzen, an meiner Brust

Women in love, in pain and in emotional turmoil – such is the subject matter of most of the songs that Swedish soprano Miah Persson and pianist Joseph Breinl have chosen for this recital of works by Robert and Clara Schumann.

The year of Robert and Clara’s wedding is often called Schumann’s Liederjahr; during this ‘year of song’ he composed more than 150 songs, and his wedding gift to Clara was in fact a song cycle, Myrthen, Op. 25. Sixteen songs dated 1840 can be found here, including the Frauenliebe und Leben cycle, the crowning achievement of the year.

But Robert also encouraged Clara to write songs and in 1841 they jointly published a collection entitled The Spring of Love. Clara had composed three of the songs (the 3 Lieder, Op. 12) and Robert the remaining nine, including Der Himmel hat eine Träne geweint

This disc also features Robert’s final song cycle – composed in 1852 and focussing on the life and tragic end of Mary Stuart, Queen of Scots – along with four of Clara’s last songs.

As well as being well-known in opera houses across the world, Miah Persson is increasingly in demand as a recitalist, performing regularly with Joseph Breinl.

Miah Persson's bright, guileless soprano ideally expresses ['Ihr Bild''s] very special simplicity and tenderness. And her accompanist, Joseph Breinl, relishes the pianistic delights of her Lorelei...Persson's Frauenliebe und -Leben also very much tunes in to her own vocal sensibility. This performance rings with exuberant delight: there's a girlish excitement, a racing pulse, and an enraptured confidence, leading to a final song of fierce grief.

Her voice is pure, her diction is terrific, and her musicality shines out of every note. And there's superb partnership from Breinl at every turn...A beautifully programmed, intimate and moving recital

her naturally sweet, gleaming tone can encompass deeper, more sensuous shadings, as in her dreamy 'Die Lotosblume'...In Frauenliebe und -leben Persson's youthful freshness of tone and eagerness of manner are constant assets. No performance of these songs could be less mawkish or matronly...an enterprising recital from a soprano of charm, intelligence and natural communicative gifts.