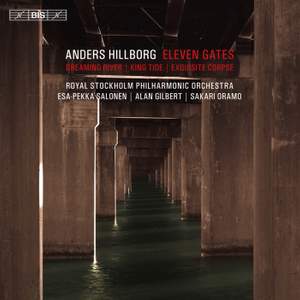 No. 1. Drifting into D major

No. 2. Suddenly in the Room with Chattering Mirrors

No. 4. Confused Dialogues with Woodpecker

No. 5. Suddenly in the Room with Floating Mirrors

No. 6. Into the Great Wide Open

No. 8. Toypianos on the Surface of the Sea

No. 9. String Quartet spiralling to the Seafloor

No. 10. Seafloor Meditation (Whispering Mirrors at the Seafloor)

No. 11. Waves, Pulse and Elastic Seabirds

As demonstrated by the four works on this disc, the music of Anders Hillborg couples complexity with directness, sensuality with humour, hypnotic meditation with pulsating rhythms, and all is combined with an original sense of form and unfaltering craftsmanship.

Hillborg recently became the first Swedish composer to have a work premièred by the Berlin Philharmonic Orchestra when Cold Heat was performed in January 2011.

Hillborg has called the symphony orchestra a ‘sound animal’. His love affair with the orchestra started in the 1980s, when he abandoned electronic music, and around the same time, Hillborg formed a bond with the conductor Esa-Pekka Salonen, who here conducts Dreaming River from 1998 and Eleven Gates, a work he premièred with the Los Angeles Philharmonic in 2006.

Sakari Oramo and Alan Gilbert are both among the most highly regarded conductors of our time, and also have a special relationship with the Royal Stockholm Philharmonic Orchestra in common, as its current and former chief conductor. The Stockholm orchestra also commissioned both Dreaming River and Exquisite Corpse.