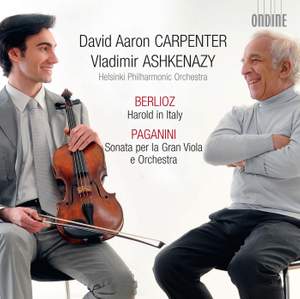 the undisputed star is the first recording of the more virtuosic, original version of Harold in Italy which is fully exploited by Carpenter's beguiling, beautiful tone and thrilling technique.... — Classic FM Magazine, December 2011, 4 out of 5 stars More…

I. Adagio (Harold in the Mountains. Scenes of Melancholy, Happiness and Joy)

II. Allegretto (March of the Pilgrims Singing the Evening Prayer)

III. Allegro Assai (Serenade of an Abruzzi Mountain-Dweller to his Mistress)

I. Introduzione: Larghetto - Recitativo a piacere

Together they perform the Symphony with Viola obbligato, “Harold in Italy,” which Hector Berlioz originally wrote on a commission from Paganini. The present recording features, for the first time, an unpublished more virtuosic soloist part written for Paganini.

The coupling is a showpiece, which Nicolò Paganini wrote after rejecting his earlier Berlioz commission; “The Sonata per la Gran Viola displays the highest virtuosic writing for this instrument,” says David Aaron Carpenter, who defines his mission as focusing attention on the viola as a great solo string instrument in its own right.

Recipient of the 2011 Leonard Bernstein Award and winner of the 2010 Avery Fisher Career Grant, David Aaron Carpenter has emerged as one of the world’s most promising young artists. In 2006, he won the prestigious Walter E. Naumburg Viola Competition and in 2007, he became protégé for The Rolex Mentor and Protégé Arts Initiative, being the youngest in this mentorship programme’s history. David Aaron Carpenter has been the protégé of several major international musical figures, such as Pinchas Zukerman, Yuri Bashmet and Christoph Eschenbach.

the undisputed star is the first recording of the more virtuosic, original version of Harold in Italy which is fully exploited by Carpenter's beguiling, beautiful tone and thrilling technique. The orchestra is no bit-part player here; Ashkenazy's ensemble throughout makes this an outstanding collaboration.

Carpenter rises to all the challenges with great dexterity, preserving fine tone and pure intonation in the most (for the viola player) alarming situations...the performance of Harold, too, has much to recommend it - a fine-toned soloist, rhythmic, well-balanced orchestral playing and clear, bright recording. There are some especially imaginative touches of tone-painting

The excellent violist David Aaron Carpenter has reinstated a virtuoso passage in the opening adagio, originally sketched for Paganini. With Ashkenazy and the Helsinki PO, he gives a masterly account of the work, glowing and incisive.

Carpenter is the eloquent viola soloist in Berlioz’s Byronic symphony...[Ashkenazy and the Helsinki orchestra ] reveal the music’s narrative heart compellingly. Paganini’s own Sonata for viola and orchestra, scarcely on a par with Berlioz, nevertheless allows Carpenter to demonstrate his lyrical musicality and bravura.