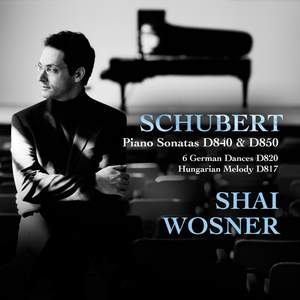 His playing of the German Dances has a muscularity and a lovely transparency, while the Hungarian Melody has an exquisite soulfulness. But what strikes the listener from the first few bars of... — BBC Music Magazine, December 2011, 5 out of 5 stars More…

Shai Wosner’s second release for ONYX after his critically acclaimed Brahms and Schoenberg debut disc (ONYX4055) of 2010. For his all Schubert programme Wosner has chosen two late sonatas. The monumental but unfinished two-movement torso D840, and the genial D850 written at a time in the composers life when he was without money, out of love, and involved with rows with his publishers. This work was one of the few sonatas to be published during his lifetime, and finally he earned 300 florins. Schumann described this sonata as ‘impetuous, overflowing’ It is one of Schubert’s happiest works, in start contrast to the stark and monolithic D840.

His playing of the German Dances has a muscularity and a lovely transparency, while the Hungarian Melody has an exquisite soulfulness. But what strikes the listener from the first few bars of the Sonata which opens this recording...is the aristocratic grace of Wosner's tone, and his expressive shades of staccato.

With this recital Shai Wosner declares himself a Schubertian of unfaltering authority and character. Entirely modern in style (tonally lean and sharply focused, never given to easy or sentimental options), he relishes every twist and turn in the so-called Reliquie Sonata...Wosner rivets your attention at every point. He also shows a high degree of charm and affection in the German Dances and the Hungarian Melody

Wosner's performance, with its extremes of dynamics, glistening pianissimos followed by thunderous fortissimos, certainly projects [a] sense of something epic, while making a link to late Beethoven, and to his last sonata, Op 111, in particular.