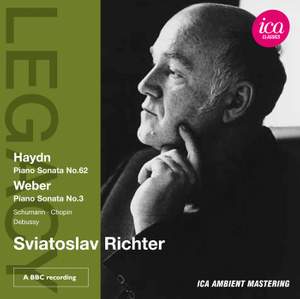 Sviatoslav Richter (1915–1997) is acknowledged today as one of the greatest pianists of the 20th century along with his great Russian contemporaries, David Oistrakh, Emil Gilels and Mstislav Rostropovich.

This rare broadcast recording makes its first appearance on CD.

The June 1967 recital at the Royal Festival Hall very much reflects the pianist’s personal taste, containing the rarely played Haydn and Weber Sonatas together with the Schumann Novelettes with the more popular additions of Chopin and Debussy.

He declared, ‘my principle is to play only works that I really love and not just those that are currently accepted’.

Of all the Haydn Sonatas that Richter played, No.62 featured more frequently in his programmes as did the Weber Sonata No.3, which he regarded in a notebook entry in 1990 as a ‘highly original work and I like it a lot’.

The two Schumann Novelettes were often played in the 1960s though Richter did not perform No.8 for the following two decades. With the Chopin and Debussy, Richter is on familiar territory, which he invests with his characteristic imagination and spontaneity.