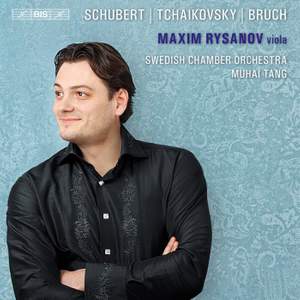 Rysanov makes the best possible case for hearing this version [of the Arpeggione], delivering a wonderfully poetic account of the solo part with subtle and sensitive accompaniment from the Swedish... — BBC Music Magazine, December 2011, 5 out of 5 stars More…

In his second disc for BIS, Maxim Rysanov here is joined by the Swedish Chamber Orchestra under the conductor Muhai Tang.

Described as 'a prince among violists', Maxim Rysanov was in 2010 chosen to perform at the Last Night of the Proms. On that illustrious occasion he played his own adaptation of Tchaikovsky's Rococo Variations.

The string section of the Swedish Chamber Orchestra of that orchestra also join him in another work usually performed on the cello – and usually with the original piano accompaniment: Schubert's Sonata in A minor

The programme is rounded off with the one completely original composition on this disc, namely the autumnal Romance in F major by Max Bruch.

On his previous disc for BIS, Rysanov also turned to the cello repertoire, performing three of Bach's suites for solo cello. That recording was selected for a special recommendation in The Strad and chosen as Classical CD of the Week in the Daily Telegraph.

Rysanov makes the best possible case for hearing this version [of the Arpeggione], delivering a wonderfully poetic account of the solo part with subtle and sensitive accompaniment from the Swedish Chamber Orchestra...Rysanov's dazzilng performance [of the Rococos] makes us believe that the work was tailor-made for his instrument.

His playing has his instrument sounding impressively like a cello, although some of the viola's capacity for subtle light and shade has been ironed out in this relentless quest for powerful tone. Max Bruch's Romance (a rare viola original) brings out a likeable, gentler streak in Rysanov's artistry.

Needless to say, Rysanov plays with consummate artistry and stylish aplomb throughout. I can also confirm that he benefits from razor-sharp yet always warmly affectionate backing from an eager Swedish CO under the excellent Muhai Tang.

Maxim Rysanov's version of the Tchaikovsky Rococo variations for cello is one of the most successful steals, not tampering with the orchestral score but simply shifting the solo part, sometimes up an octave to give its virtuosic writing brilliance and allure. Rysanov's viola sound is warm, lyrical but with an edge to it that suits Schubert's "Arpeggione" sonata

Max Bruch’s meltingly beautiful Romance makes for a serene envoi to this delectable disc...[Rysanov] makes [the Rococo's] viola transformation sound thoroughly idiomatic. His burgundy timbre brings lustre to the music; his transpositions of passages into higher registers capitalise on the viola’s own spectrum of sonority, and his agility and subtlety are a marvel.