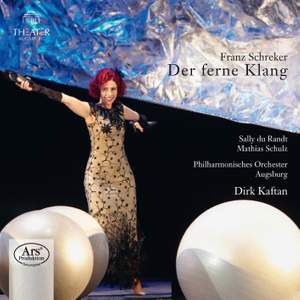 Franz Schreker (1878-1934) is one of the many late romantic German and Austrian composers who became victims of the Nazi purge on “degenerate art”. Schreker came in for abuse mostly because of some Jewish roots in his family and a penchant for lurid subject matter in his most famous operas. Musically, his operas are no more radical than Strauss’ Elektra. But whereas Strauss retreated into a sort of polite neo-classicism tinged with Wagner in his later years, Schreker stayed a basically late-romantic expressionist and this expressionist aspect doomed his music.

Der Ferne Klang debuted in 1912 in Frankfurt and launched Schreker into the top rank of composers of his time. The same year he was appointed to the faculty of the Vienna Academy of Music in the areas of counterpoint, harmony, and composition. The plot involves an artist who abandons his fiancé to go in search of “the distant sound” which will allow him to produce the perfect work of art. As the opera progresses, the main character, Fritz, leads a life of gradually increasing desolation and eventually dies. On his death bed he finally hears “Der ferne Klang”. The score is in fine expressionist mode, though basically tonal. Schreker was one of the most brilliant orchestrators of the early 20th century.

The present recording arises out of highly acclaimed live performances of the opera given in the Augsburg Opera House (Germany) in spring 2010.