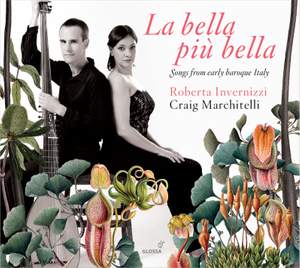 This is vocal writing that thrives on extremes: complex, emphatic, dissonant and brilliantly embellished...Invernizzi is a fearless singer. Some notes are stripped violently dry and thin, others... — BBC Music Magazine, May 2014, 4 out of 5 stars More…

Known for her dazzling and elegant displays in the music of the later Baroque the Milanese singer has also nurtured, across her career, the more delicate and nuanced art of the Italian song repertory from the early 17th century. It was a time when courtly and polyphonic expression were giving way to the “moving of the emotions” by a solo singer accompanied by a single instrument. Renato Dolcini guides us through the musical evolution of this form in his illuminating booklet essay.

'La bella più bella' sees Roberta Invernizzi sailing gracefully across the terrain of such monody in songs composed by the likes of Kapsberger (his Ninna nanna), Giulio Caccini and Barbara Strozzi, as well as Luigi Rossi, whose dream-like piece provides the album with its title. Three of Claudio Monteverdi’s later works conclude this recital, in which lutenist and theorbist Craig Marchitelli accompanies, and also contributes a number of solo pieces, by Kapsberger, Castaldi and Piccinini.

This is vocal writing that thrives on extremes: complex, emphatic, dissonant and brilliantly embellished...Invernizzi is a fearless singer. Some notes are stripped violently dry and thin, others made hot and heavy with vibrato, and her fioritura in Monteverdi's Voglio di vita uscir is coruscating.

Invernizzi's delivery is forthright, refusing to relax and bloom into vibrato until the very last, digging deep into the suspensions that give this music its emotional friction. She delivers operatic scope within the intimate framework of a vocal recital...Recorded close, this disc has all the brightness and directness of a live performance.