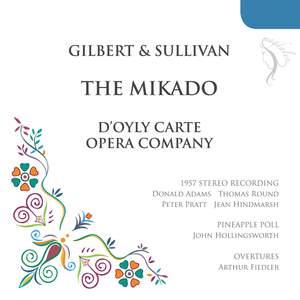 The pleasure of hearing singers in this music who have both the voice and an understanding of the style is considerable...It is good to have these additional items. The synopsis is clear and... — MusicWeb International More…

Sullivan, A: The Mikado Overture

Sullivan, A: The Mikado, Act I

"If you want to know who we are... Gentlemen, I pray you tell me"

"A wandering minstrel, I"

"And I have journeyed for a month"

"As some day it may happen"

"Comes a train of little ladies"

"So please you sir"

"Were you not to Ko-Ko plighted"

Sullivan, A: The Mikado, Act II

"The sun whose rays are all ablaze"

"My object all sublime"

"See how the fates their gifts allot"

"The Flowers That Bloom In the Spring"

"Alone, And Yet Alive"

"Hearts Do Not Break"

"There's a Beauty in the Bellow"

Sullivan, A: The Mikado, Finale Act II: "For He's Gone and Married Yum-Yum"

The Pirates of Penzance

Sullivan, A: Pineapple Poll, Scene One

"Entry of Belaye With Blanche As Bride" (arr. C. Mackerras)

Despite being, by common consent, the best of three post-war D’Oyly Carte Opera Company recordings of The Mikado, this sparkling early stereo performance with Donald Adams, Thomas Round and Peter Pratt has never been reissued by its parent label during the CD era.

As it was not recorded with dialogue, the extra space has enabled Magdalen to include not only John Hollingsworth’s vivid version of Pineapple Poll but also, for the first time on CD, three overtures conducted con brio by the inimitable Arthur Fiedler.

The pleasure of hearing singers in this music who have both the voice and an understanding of the style is considerable...It is good to have these additional items. The synopsis is clear and there are interesting notes on the performers