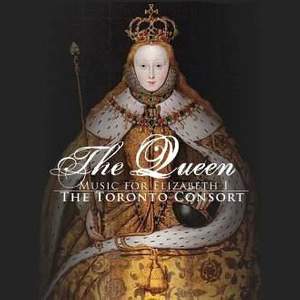 The Queen: Music for Elizabeth I

Johnson, J: A Dump or The Queenes Treble

anon.: Ring out your bells

Campion: Woo her, and win her

Dowland: Say love if ever thou didst find

Campion: Where are all thy beauties now?

Bennet: All creatures now are merry-minded

‘The Queen’ is a new CD by the Toronto Consort – numbering some of Canada’s leading early music specialists – which recreates musical life at the court of Elizabeth I. Many of these songs were written for or about this remarkable monarch, while others are songs that would have been performed at her court.

The Toronto Consort is Canada’s foremost chamber ensemble specialising in the music of the Middle Ages, Renaissance, and early Baroque periods. The consort members include both singers and instrumentalists (lute, recorder, guitar, flute, early keyboards and percussion).They have previously produced a recording for Marquis titled “Praetorius Christmas Vespers” (774718133526), as well as several CDs for the American label Dorian. Queen Elizabeth the First was an accomplished musician so it is likely that she played many of the songs featured on this album. Elizabeth was also, famously, a lover of dancing and dance music. Even as she lay dying, Elizabeth is said to have asked for music so that she might die as gaily as she lived. She heard music until her last breath.