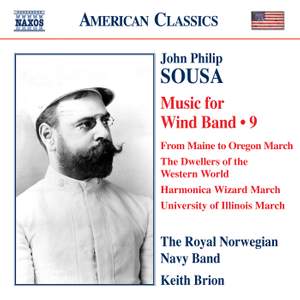 Sousa: The Dwellers of the Western World: Suite

I. The Red Man

Sousa: Chris and the Wonderful Lamp: The Man behind the Gun (arr. K. Brion for wind band)

John Philip Sousa personified the comparative innocence and brash energy of America around the turn of the 20th Century. The Charlatan was second only to El Capitan in popularity, while the U.S. Field Artillery March is the official march of the United States Army. A number of the other marches on this album were drawn from Sousa’s musicals, quote from other popular musicals or include various national anthems. ‘Keith Brion, one of the foremost authorities on the music of Sousa, has been building an extensive library of Sousa’s music for Naxos since 1998… Sousa-lovers will want the whole series.’ (Fanfare)