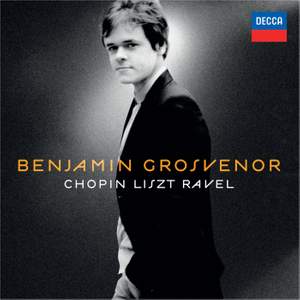 one of the most individual things about this stunning debut by Benjamin Grosvenor is his pervasive sense of balance and his unerring blend of Classical restraint and Romantic ardour...He is a... — BBC Music Magazine, October 2011, 5 out of 5 stars More…

Recording of the Week,  Benjamin Grosvenor

Fresh from his BBC Proms triumph last week, the eighteen-year-old British pianist makes a hugely impressive debut on Decca with a programme which includes Ravel’s formidable Gaspard de la Nuit and music by Chopin and Liszt.

Chopin Liszt Ravel is the debut album from the incredible Benjamin Grosvenor. Decca Classics’ new signing made his name as an 11 year old prodigy when he performed at the BBC Young Musician Final, (narrowly missing out to winner, violinist Nicola Benedetti). Still only aged 18, Benjamin has burst onto the performance scene. His debut album, Chopin Liszt, Ravel is out this July.

Benjamin is due to receive nationwide media attention when he performs at the First Night of the Proms, which will be followed by a BBC Breakfast News appearance. He will also tour this season with the National Youth Orchestra (and play at their BBC Prom) showing his relevance and support to young classical musicians today.

one of the most individual things about this stunning debut by Benjamin Grosvenor is his pervasive sense of balance and his unerring blend of Classical restraint and Romantic ardour...He is a virtuoso who declines the mantle of virtuoso, every gestures being put exclusively and exhilaratingly at the service of the music. Grosvenor's playing exudes joy and spontaneity, seeming to release rather than interpret the music.

In Gaspard he magically combines the micro-refinement of a Pogorelich with the poetic wisdom and golden touch of a Perlemuter, and in Chopin's Scherzos integrates the music's hurtling mood-swings with mesmerising intensity.

evidence of an awesome talent, a pianist with fantastic natural reflexes in the Cziffra class and, more excitingly, a musician with purpose and imagination, whose playing transcends the sterile confines of the studio...Crowning all is a masterly Gaspard in which an astonishing array of touch and tonal colouring are brought to bear in Grosvenor's vivid, distinctly defined characterisation of all three movements.

This release is quite superlative in every way...Grosvenor's fleet-fingered virtuosity is a match for the finest...Despite this, there's a modesty and humility to these readings which is wonderful to behold...Grosvenor is seemingly incapable of producing an ugly tone and the richness of colour and nuance has been perfectly captured by the Decca engineers. This is essential listening.

Both the main works here...demonstrate the brilliance of Grosvenor's technique as he takes the challenges of Chopin's pieces in his stride, and vividly conjures up the colours of Ravel's piano writing, if rather underplaying the pieces' nightmarish qualities

It's an immensely confident set, comparable to Evgeny Kissin's early performances – the most impressive aspect being not his obvious command of technique, but an intellectual and emotional understanding of the music way beyond his tender years.

This recital disc shows his ability to twin youthful exuberance with impeccable technique and magisterial musical intelligence...Grosvenor's balance of oratory and ornament, gesture and poetry – evident, too, in Ravel's Gaspard de la nuit – are moving as well as impressive. He's a phenomenon: modest, poised and natural, as well as brimming with talent.

The first thing you notice is the limpid surface of Grosvenor’s playing, the warm tonal gleam that he conjures up from the keys. It is a beautiful sound, and beneath it there are seams of passion, discretion and emotional affinity with the music...there is little to quibble with in this recital, which shows intelligence coupled with a command of keyboard colour and musical characterisation that are remarkable.

Have you ever heard a more aqueous evocation of Ravel’s water nymph? Grosvenor’s Steinway instrument seems permanently underwater, swimming through the softest of rippling textures...Grosvenor, you can tell, is a Romantic pianist, almost from another age. He doesn’t deconstruct, or stand at a distance. He jumps inside the music’s soul.