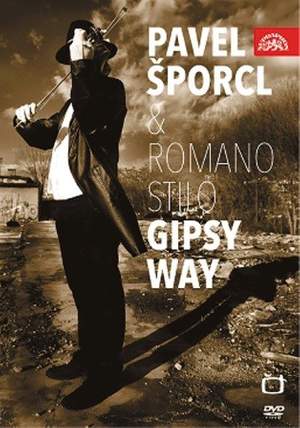 Smetana: Faithful love cannot be marred (from The Bartered Bride)

The new DVD featuring the violin virtuoso Pavel Šporcl captures one of his two unique open-air concerts at the Smetana Litomyšl festival with the Slovak Roma cimbalom band Romano Stilo that took place in the middle of June 2010 in the castle courtyard.

The concerts were truly extraordinary events for Pavel owing to the unusual repertoire and the special atmosphere both on the stage and among the audience.

While Pavel Šporcl regularly steps out from the domain of classical music to embrace zestfully other genres, Romano Stilo cannot be considered an orthodox cimbalom band either. In addition to Gypsy, Russian, Hungarian and Romanian folk music, they performed compositions by Pablo Sarasate, Johannes Brahms and Aram Khachaturian, as well as the film themes from Schindler’s List and The Fiddler on the Roof, all of them spiced with a soupçon of jazz... Pavel plays a repertoire that seems to be the natural domain of musicians with Gypsy blood with such mastery and abandon that one feels tempted to look into his family tree – and Romano Stilo are a wonderful partner to him. It was a true joy to be there – and this DVD affords you the unique opportunity to savour their splendid performance.