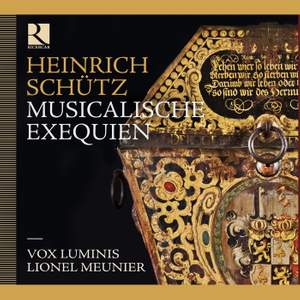 The 12 voices of Belgian ensemble Vox Luminis put their faith in tonal focus and sweetly balanced textures. Though one might expect from that a certain coolness, their singing produces music-making... — Gramophone Magazine, Awards Issue 2011 More…

With the Thirty Years’ War raging around them, Lutherans considered death to be the true fulfillment of their earthly life.

Prince Heinrich von Reuss organised all the details of his funeral in advance, from the music that would be sung - to be composed and then performed by Heinrich Schütz during the funeral ceremony - to the coffin itself.

Our programme includes not only the renowned Musicalische Exequien but also other funeral motets by Schütz, one of which was composed on the death of his friend Johann Hermann Schein. After the success of their CD of works by Samuel Scheidt (RIC301), Vox Luminis now take up the challenge of one of Schütz’s greatest sacred works.

It should be noted that the CD cover art is a photograph of a section of the coffin that Reuss himself had ordered; Prince Heinrich XIII Reuss has most generously allowed its use by Ricercar for this recording. The coffin is made of solid copper; its richly decorated exterior is studded with cartouches that contain liturgical texts selected by the deceased prince.

The 12 voices of Belgian ensemble Vox Luminis put their faith in tonal focus and sweetly balanced textures. Though one might expect from that a certain coolness, their singing produces music-making of intimate, aching beauty. The recorded sound, gently resonant, is perfect...A marvellous disc.

This is an exceptional new Schütz recording...the most completely satisfying version that I have ever heard of this extraordinary work...Meunier's pacing feels utterly natural, and both the inventiveness and meditative repose of Schütz's music comes across marvellously. In short, if you are looking for a recording of this beautiful and daring work, this new Ricercar disc is the one to choose.

In many ways it is a very simple approach – minimum forces, and singing with a purity of tone and spot on intonation, giving a well balanced and perfectly blended sound – but the result is incredibly persuasive and very moving.

It has received some fine recordings, and this new one is quite outstanding – 12 light-voiced singers alternating solo, ensemble, and "choral" forces, a beautifully balanced ensemble of individual yet blended voices. Photos of the magnificent coffin of the noble lord in whose honour this music was written are in the booklet; Lionel Meunier's thoughtful direction makes a serene and rewarding disc.