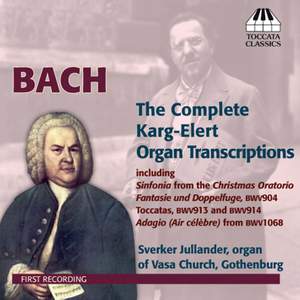 Sigfrid Karg-Elert (1877–1933) was Professor of Composition at the Leipzig Conservatory and best-known as Germany’s foremost champion of the Kunstharmonium, ‘art harmonium’, which at that time was a full concert instrument and for which he made over 400 transcriptions.

He began his musical career as a boy chorister and organist who deserted the seminary where he was enrolled to become an oboist in a wind band. Later, rejected from active service because of his age, he served as a military musician (oboe) during WWI. But it was his organ music that made him internationally famous as a composer, particularly in the USA and UK,

although he was unusual in having no professional proficiency himself; a recital tour of the USA in 1932 was so disastrous that it might even have precipitated his death a year later.

His own organ music is frequently recorded and heard in recitals, but his many organ transcriptions are less familiar. After Wagner, Bach was the composer whose music Karg-Elert transcribed most often, carefully choosing the pieces best suited to the dynamic and colouristic possibilities of the late Romantic organ.