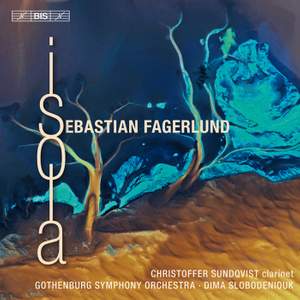 a composer who can side with his great countryman Sibelius without the slightest need for self-protective irony. These are three strong, freshly poetic pieces, that make themselves understood... — BBC Music Magazine, September 2011, 5 out of 5 stars More…

Born in 1972, Sebastian Fagerlund was recently described as ‘yet another obscenely talented young musician from Finland’ (MusicWeb International). The musicians of the eminent Gothenburg Symphony Orchestra revel in the composer’s striking gift for orchestration, in performances supervised by the rapidly emerging young conductor Dima Slobodeniouk, The clarinettist Christoffer Sundqvist’s playing served as inspiration for the composer as he wrote his colourful and eventful Clarinet Concerto.

Partita is a work consisting of three movements with titles that mirror the composer’s concerns: Cerimonia (Ceremony), Risonanza (Resonance) and Preghiera (Prayer).

Closing the disc is Isola (Island) which sprang from a visit by the composer to an island in the Turku archipelago formerly used to segregate lepers and the mentally ill from the rest of society - an ‘isle of the dead’ which today is an idyllic holiday location. A similar alternation of darkness and light, of movement and motionlessness, of violence and sensitivity, permeates Fagerlund’s tone poem.

a composer who can side with his great countryman Sibelius without the slightest need for self-protective irony. These are three strong, freshly poetic pieces, that make themselves understood directly without any kind of verbal conceptual help - and yet which also reward repeated hearings...Full marks to clarinettist Christopher Sundqvist, the Gothenburg Symphony and Dima Slobodeniouk for putting all this music across with such power, intelligence and refinement

Dedicated performances and fine recording quality give the music every chance to speak.