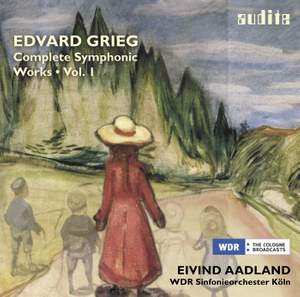 Aadland is a native of Grieg's Bergen, steeped through his family in the Norwegian folk-music tradition...To the WDR players he has communicated a lightness of touch and a fine Grieg balance... — Gramophone Magazine, October 2011 More…

II. The Death of Aase

IV. In the Hall of the Mountain King

Edvard Grieg wanted to give Norway its unique voice within European concert repertoire, and he did that with songs, piano pieces, and particularly with his symphonic works, to be released by Audite in a 5-volume complete recording with Eivind Aadland and the WDR Symphony Orchestra.

This first SACD presents Grieg’s principal collections: his four Symphonic Dances of 1898, where the composer draws on his experiences as a conductor of the leading European orchestras; and his two suites from the incidental music to Henrik Ibsen’s drama Peer Gynt, the story of the “Nordic Faust” which inspired Grieg to compose a sonic panorama of the Norwegian character: from the melancholy song of the abandoned Solveig to the furious chase in the Hall of the Mountain King.

Eivind Aadland’s roots in the Norwegian folk tradition audibly influence his interpretations. He comes from a family where folk music played an important role and as a child he came into intensive contact with Grieg’s music. Aadland was chief conductor and artistic director of the Trondheim Symphony Orchestra from 2003 until 2010 and has also worked with many other international orchestras. He initially studied the violin with Yehudi Menuhin and from 1981 until 1989 he was concert master of the Bergen Philharmonic. From 1987 until 1997 he was music director of the European Union Chamber Orchestra. He has subsequently devoted himself fully to his conducting career and studies with Jorma Panula.

Parallel to the release of the first SACD, a video will be available which will be also presented on www.audite. de. The second volume is scheduled for release in August.

Aadland is a native of Grieg's Bergen, steeped through his family in the Norwegian folk-music tradition...To the WDR players he has communicated a lightness of touch and a fine Grieg balance in which the winds sing out almost like concertante soloists...With recording matching the scale of the music-making, Aadland's new cycle...has hit the ground running.

[this disc] should really be heard not only by all admirers of this composer but also by his detractors...in terms of tempos and of internal orchestral balance, Aadland places this music on altogether a higher plane than it usually occupies, and obtains really fine playing from the West German Radio Symphony Orchestra of Cologne. This is notable music-making